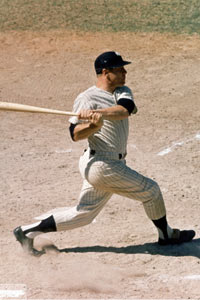 Mickey Mantle played for the New York Yankees from 1951-1968 and lead the Yankees to capturing the 1958 World Series championship against the Milwaukee Braves.
Rogers Photo Archive/Getty Images

Although the National League prides itself as being the "Senior Circuit," it has become a safe haven for pitchers. National League batting lineups tend to be weaker than AL lineups. That's because the AL not only has the DH, but most No. 9 batters in the American League are much stronger than their counterparts in the National League.

Many pitchers who move from the NL to the AL often have a very unpleasant time. That's because moving to the American League is such a challenge, the pitchers do not do as well as they did in the National League [source: Schwartz].