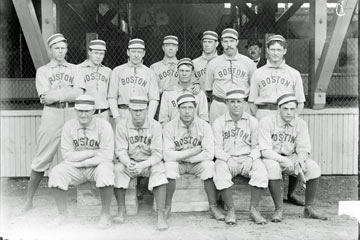 The American League gained credibility when the Boston Red Sox (known at the time as the Boston Americans) won the first World Series in 1903.
Chicago History Museum/Getty Images

During the 1950s, '60s and '70s, Major League Baseball began expanding for the first time. In the American League, the St. Louis Browns moved to Baltimore to become the Orioles, one of the original American League teams that had earlier disbanded. The demographics of the United States were changing, and the game moved west following the population. The National League took a huge advantage during this period. The National League soon had teams in Los Angeles, San Francisco and San Diego [source: Treder].

The American League finally took notice, and a few teams made their way westward. The Philadelphia Athletics moved to Kansas City, before moving to Oakland, Calif., in 1968. In 1961, the Los Angeles Angels entered the American League. Also in the 1960s, the Washington Senators became the Minnesota Twins. In 1969, the Kansas City Royals and the Seattle Pilots entered the league. In 1970, the Milwaukee Brewers were formed. Another Washington Senators team moved to Texas, and later became the Texas Rangers. In 1977, the American League expanded into Toronto (Blue Jays) and Seattle (Mariners) [source: Treder].

Of course the most successful American League team has been the New York Yankees. In fact, the Yankees have been the most successful franchise in baseball, winning 27 World Series titles. Interestingly, the Yankees started their existence as the Baltimore Orioles. In 1903, two men, Frank Farrell and Bill Devery, bought the Orioles after the franchise went belly up. They paid $18,000.

The two then moved the team to New York City, and named the franchise the Highlanders because they played in a ball park on one of the highest spots in Manhattan. The Highlanders eventually became the Yankees, and began playing in Yankee Stadium in 1923 [source: New York Yankees]. The Yankees dominated league play for many decades.