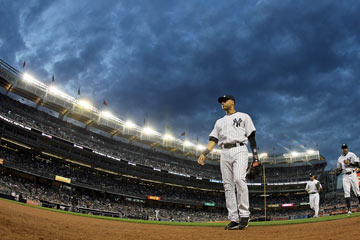 Derek Jeter of the New York Yankees walks to the dugout after an inning against the Tampa Bay Rays at Yankee Stadium. See more sports pictures.
Jim McIsaac/Getty Images

Let's put an end to this popular myth right now: Abner Doubleday did not invent baseball. It's a nice story, but the West Point graduate, who found himself at Fort Sumter when the Civil War began and at Gettysburg two years later, had nothing to do with the game.

According to legend, Doubleday invented baseball in Cooperstown, N.Y., in 1839. Cooperstown, which is home to Major League Baseball's Hall of Fame, is a Currier-and-Ives-sort of community on Otsego Lake. Most baseball historians dismiss the story as fantasy, and Doubleday never asserted that he invented the game. Rather, a baseball panel in 1908 made that unfounded claim.

What isn't a legend is the popularity of game itself. During the Civil War (1861-1865), soldiers played baseball in camp when they weren't fighting. Ballplayers not on the battlefield were often being paid to play in cities such as Cincinnati.

The National League was a bit vexed at the upstart American League. The new league was honing in on the National League's monopoly. There wasn't much the NL could do. In 1903, the two leagues agreed that each would be a major league and the league champions would play each other in what we now know as the World Series.

It didn't take long for a fierce rivalry between the National and American leagues to form. The fans loved it. The players loved it. In 1903, the champions of both leagues met in the first World Series, which was won by the American League's Boston Red Sox [source: Bendix].