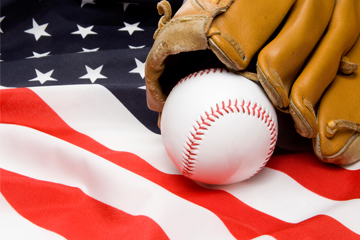 Although it's beloved by Americans, baseball may not have originated in the U.S. See more sports pictures.
iStockphoto/Thinkstock

Baseball, hot dogs, apple pie and Chevrolet: Above all else, these are the things we revere as quintessentially American. Yet hot dogs have their roots in Germany and Austria, and apple pie dates back to Chaucer's England. Chevrolet undisputedly comes from the good ole USA, but no one really knows for sure where baseball originated.

Today, however, baseball historians like John Thorne dismiss the idea that Cartwright invented baseball. Thorne points out that people had been playing baseball, or closely related variations, for more than a century before either Doubleday or Cartwright ever picked up a ball. References to a game called "Base Ball" appear in multiple sources, from a 1744 English book of children's verse called "A Little Pretty Pocket-Book" to Jane Austen's novel "Northanger Abbey," penned in 1798.

Some say that these early references may actually refer to an English game called Rounders. As in baseball, Rounders players hit pitches with bats and run around four posts (bases) to score points. Unlike baseball, players don't wear ball gloves, and batters run whether they manage to strike the ball or not. Still, the two games share an undeniably common root, and that root appears to originate in England -- not America.

In 2008, baseball's English roots made headlines when a diary by William Bray was unearthed in Surrey. On March 31, 1755, young Mr. Bray recounted that he spent the day playing "at Base Ball" with a mixed group of young men and women. The Surrey County Council's History Center crowed that the manuscript provided "proof that the game the Americans gave to the world came from England" [source: Associated Press].