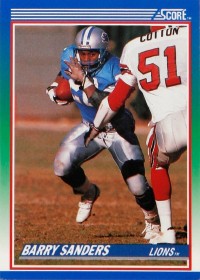 For sheer elusiveness, the Detroit Lions' Barry Sanders was the greatest runner in NFL history this side of Gale Sayers. Joining the Lions in 1989, following a three-year career at Oklahoma State, Sanders' accomplishments were nothing short of spectacular.

Though not big by most standards, the speedy, 5'8'' Sanders capitalized on his size by running low to the ground, making himself less of a target for would-be tacklers. He ran so low, in fact, that at times he seemed to defy gravity.

Sanders (born 1968) began as an understudy to All-American halfback Thurman Thomas at OSU. When Thomas departed for the NFL, Sanders, a junior, assumed the starter's role.

That season, the soft-spoken Wichita, Kansas, native electrified the nation as he demolished seven major NCAA single-season records, including rushing yards (2,628) and touchdowns (37). Of course, he won the Heisman Trophy.

After foregoing his senior season, Sanders made his pro debut just three days after signing with the Lions, who had made him their first-round pick.

He absolutely dazzled the Pontiac Silverdome crowd when he darted and dashed for an 18-yard gain on his first NFL carry. But that was just the beginning. His 1,470 yards rushing that season was a Lions record and just 10 yards short of the league's best for the year.

The following season, the sophomore pro seized the rushing crown with 1,304 yards, and he demonstrated his versatility by racking up another 462 yards receiving.

In 1994, Sanders rushed for 1,883 yards, then the fourth-highest single-season rushing total in NFL history. And in 1996, Sanders became just the eighth player in NFL history to rush for more than 11,000 yards.

He is one of only two running backs to have gained more than 1,000 yards in each of his first eight seasons, joining his old friend and college teammate, Thomas, in that exclusive club.

The very next season was the best of Sanders' career, as he rushed for 2,053 yards, becoming the third player in NFL history to break the 2,000-yard barrier. The total made Sanders the first RB to gain 1,500 yards or more in five seasons and the only one to attain the total in four consecutive years.

Sanders was named the co-MVP of the 1997 season along with Brett Favre.

One year later, having gained 1,491 yards and within a season's striking distance of Walter Payton's all-time career rushing mark, Sanders abruptly retired from the NFL.

Having left the game on his own terms at the young age of 31, Sanders is forever interlocked with another rusher considered among the all-time best to retire prematurely, Jim Brown.