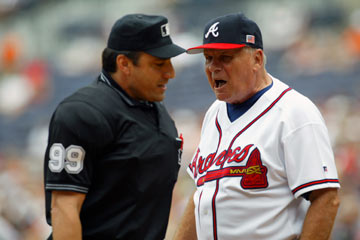 "I never called a balk in my life," former baseball umpire Ron Luciano famously said. "I didn't understand the rule." Luciano wasn't alone; baseball -- there are rules governing just about everything. After all, these rules are what have elevated the game to a competitive sport, and not just a game of stickball. One of the least-understood rules in baseball is the balk rule. As recently as 2011, then-Chicago White Sox pitcher Mark Buehrle told reporters that he didn't understand the balk rule, mainly because it's a highly subjective rule that's open to interpretation by the umpire [source: Padilla].

So what is a balk, anyway? Simply put, it's an illegal motion by the pitcher. Every move the pitcher makes while in the act of delivering a pitch is regulated, and if he strays from any of the permitted pitching motions it is considered a balk, nullifying the pitch and moving the baserunners one base closer to home plate.

The balk was first introduced to the baseball lexicon in 1857 -- before the American Civil War started -- making it illegal for the pitcher to step over a line that was placed 45 feet from home plate when delivering a pitch. If the pitcher balked, each base runner was able to advance one base.Since then, the balk rule has been codified and it has evolved. In 1898, the balk rule was first introduced to Major League Baseball's official rule book, and in 1988 the rule was slightly tweaked [source: Von Lehman].

When delivering a pitch, the pitcher must begin from one of two positions -- the "set" (or the "stretch," as it's commonly known) and the "windup." In the windup, the pitcher faces the batter and he can take one step backward or forward with his free foot. In the set position, which is typically used when there are runners on base, the pitcher stands facing the batter with one foot on the pitching rubber and the other foot out in front.

Switching between the set and the windup without first disengaging the rubber (stepping off the pitcher's plate and putting his hands down) is considered a balk, but it isn't the only type of balk that can be called. According to the rule book, it is a balk whenever "the pitcher, while touching his plate, makes any motion naturally associated with his pitch and fails to make such delivery." For example, if the pitcher pretends that he is pitching towards home plate and instead delivers a throw to one of the basemen in a pickoff attempt, it should be called a balk [source: MLB].

The reason the balk is so confusing to Buehrle and other pitchers is that the pickoff attempt is an accepted part of the game. Pitchers are perfectly within their rights to attempt to throw a baserunner out, but they aren't allowed to do it while motioning toward home plate in what's considered a "motion naturally associated with his pitch."

How Umpires Work
What is the fourth out?
How Minor League Baseball Teams Work