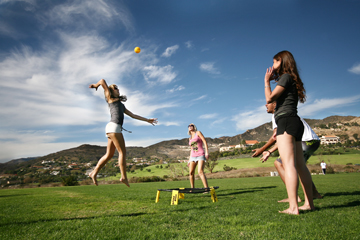 A cross between volleyball and four square, spikeball is popping up on college campuses and in recreational leagues all over the U.S. See more sports pictures.
Spikeball, Inc.

This is not your grandmother's lawn game. From what I can tell, it's not even your out-of-shape cousin's lawn game. And actually it doesn't require a lawn.

The endorphin rush that is Spikeball is tough to classify, but its creators call it a cross between volleyball and four square. Basically, shrink a volleyball net, make it a circle, flip it on its side, and use it as the base for the most vigorous, two-on-two four-square game of your life.

It all looks a little awkward at first glance, what with that low-lying, hula-hoop-sized net at the center of an otherwise airborne game, but since its relaunch in 2009, Spikeball has become full-on rage [source: Ruder]. The game was on store shelves briefly in the early '90s, which is when Spikeball president and co-founder Chris Ruder started playing it. Over the years, observers asked Ruder and his friends so often what they were playing and where it was sold, they decided to put it back out there [source: Nagurski].

Now, Spikeball nets dot campus quads, parks and beaches all over the United States and beyond. In fact, the company briefly ran out of inventory in July 2013. Chris attributes the current success to the power of the Internet. Plus, he says, players average 28 new friends per five minutes of play and an attractiveness increase of 48 percent during the game.

Chris is a kidder.

But he has a point. By all accounts, Spikeball is a remarkably welcoming sport. When I contacted Tommy Adesso at the Spikeball Denver league for a quote, he invited me to play with them at the park the next day. And as far as attractiveness goes, I wouldn't be surprised if at least a few of the hard bodies leaping and spiking got that way by playing Spikeball. Leisure game this is not.

But it does share some traits with leisure games like ladder ball and bean bag toss. It's portable. You don't need a ton of space. Setup is easy. Trash talk is required. It works on pretty much any surface. And it'd be rare to find a Spikeball net without a 12-pack of beer close by. Though in Spikeball, you probably won't be holding one while you play. 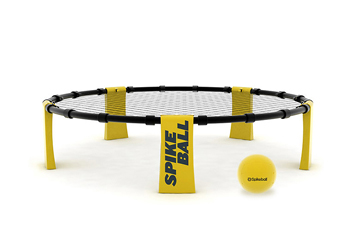 Spikeball rules are pretty intuitive. Volley for first serve (hit the ball back and forth until one team drops it), alternate serving between team members, and don't use legs or feet to hit the ball [source: Spikeball]. Unless you want to. "Body shot" allowances tend to vary widely between leagues [source: Adesso, Ruder].

To claim victory, a Spikeball team needs 21 points and to be ahead by at least two. So if one team reaches 21 and the other has 20, the game continues until the two-point separation is met.

If the ball hits a "pocket," the space between the net and the rim where the clips join the two, the round is a do-over.

Beyond that, it's all fun and games – or almost all. In the words of Skyler Boles of the Chico Spikeball league in California (whom Chris Ruder considers probably the best player in the U.S.), it's also the ultimate test of "hand-eye coordination, touch, finesse, deception, strategy, [and] mental toughness."

So, what's up next for the fledgling sport that has spawned leagues all over the U.S., national tournaments, and what appears to be a full-fledged counterculture in just a few years?

But seriously, "Community building. Trying to introduce as many players to each other as possible. That's my favorite part of the business ... There seems to be a strange, yet awesome, inherent trust and friendship among Spikeballers."

Maybe it's the endorphins.

Tips and Tricks for Improving Your Spikeball Play

Wear sunglasses. You'll be looking up a lot. Hit the ball with a flat, open hand -- it's soft. Pass the ball as close to the net as you can for the final spike. It makes the net a bigger target. Position the ball over the center of the net for the third hit so it's harder for the opposing team to predict where it's going [sources: Adesso, Boles]

This article was one of the most enjoyable ones I've written in a long time. I wrote to two different Spikeball sources and received responses from three, all in a matter of hours. I'm usually happy if I get any response at all. It was odd and uplifting, which I suppose could describe the sport of Spikeball. I didn't play the game with Spikeball Denver, fearing I'd embarrass myself, but who knows. Maybe next week.