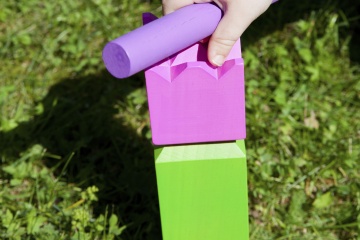 The king block in a game of kubb, topped with a jaunty wooden crown.
©iStockphoto.com/Pulvret80

It's possible that a game will end in the first six throws. However, it's much more likely that some of the Lannister kubbs will still be standing after the Starks run out of batons. In that case, once all of the Starks' batons are thrown, the Lannisters begin their turn.

In the most basic version of the game, toppled kubbs are removed from the pitch as they fall, until the king is finally taken down. However, in one of the most widely played versions of this game, toppled kubb go right back into play. Here's how:

After the Starks run out of batons, the Lannisters pick up their fallen kubbs and throw them into strategic positions onto the Starks' side of the pitch. Then, the Starks stand these kubbs right where they fell. These are now called field kubbs.

During all of this, many players take pride in the quality of their Viking trash talk, perhaps hoping to distract the other team (or maybe just to speak in a funny accent). As with all lawn games, kubb is often interrupted by tasty snacks and drinks, a fact that undoubtedly adds to its appeal.

Now that you know the basics of kubb, read on for some of the finer points on game play.