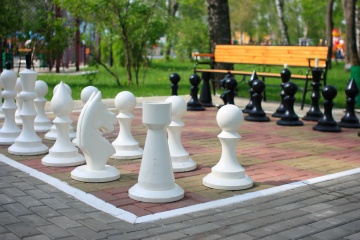 Love chess? If you can't find a pickup game at your local park, it might be time to build a set of your own.
iStockphoto/Thinkstock

In 1974, the film "The Three Musketeers" starring Raquel Welch, Richard Chamberlain and Michael York, among others, hit big screens across the U.S. Based on the classic novel by Alexandre Dumas, the farcical comedy centered on a young man who arrives in Paris to become one of the king's musketeers. The film was noted not only for its all-star cast but also for its beautiful European locations.

To illustrate the extravagance and garishness of France's prerevolutionary monarchy, director Richard Lester filmed a scene in which King Louis XIII is playing chess. Louis wasn't playing on an ordinary chessboard. He was playing on a king-sized one carved into the well-manicured lawn of Versailles. Great Danes, Dalmatians and other dogs served as movable chess pieces.

You might think that playing lawn chess with dogs is a game that only the rich and make-believe kings can enjoy. Hold on to your rooks (or your retrievers). You, too, can play outdoor chess, and we're not talking with a board on a picnic table. Many homes, buildings and public spaces have oversized chessboards. On Long Island, for example, an affordable housing complex called Arbor House has an outdoor fitness park with a jumbo chessboard and pieces standing 4 feet (more than 1 meter) tall. In Scotland, children move chess pieces almost as large as they are to help fight obesity [sources: Alvarez, The Scotsman].

We can set you up with an outdoor set and life-size pieces. All it takes is a bit of ingenuity, or at the very least, a credit card. Read on to find out how you, too, can beat your courtiers on a chessboard that will make your home into a mini-palace.

If you're handy with a tape measure and a mower, then creating your own lawn chessboard might be just what Garry Kasparov ordered. Before you start giving the lawn a haircut, however, you need to consider the available space in your yard. Remember, chess is played on a 64-square board made up of eight rows, each containing eight equal spaces. Each square alternates in color.

Mowing a chessboard onto your lawn is in reality "striping" your lawn, just as the professionals do on sports fields. You create stripes by bending the blades of grass in one direction or another. Let's get started. Note: For the sake of easier reading, we're going to skip the metric conversions in the directions.

Here's a tip: if you really want a colorful chessboard, buy lawn paint. It's made by a company called World Class Athletic Surfaces. It's the stuff sports stadiums use to paint all those neat designs. The paint covers the grass, but allows each blade to receive some sunlight so they can continue to grow. Paint one set of squares one color, and the other set another. Never use household paints. They'll kill your lawn [source: DIY Network].

If you don't feel like carving or cutting a chessboard into your lawn, there's no reason why you should. You can simply buy a life-size board and install it as if you were laying a rug in the living room. You can by chess blankets or nylon boards with 12-inch or 24-inch (30-centimeter or 60-centimeter) squares. You can also purchase rubberized vinyl, similar to the heavy-duty flooring you see at the school gym. These tiles clip together and can be rolled up and carted away.

Instead of concrete, this beautifully landscaped outdoor chessboard opts for pebbles, but it doesn't look like those pieces are too mobile.
iStockphoto/Thinkstock

If your lawn isn't big enough for a chessboard, perhaps your patio is. Already have a block patio? You're halfway there. Keep in mind that patio blocks come in all different sizes. Some are 16 inches by 16 inches (41 centimeters by 41 centimeters); others are 10 feet by 10 feet (3 meters by 3 meters). Once again, math is important. Figure out the space your chessboard is going to cover and paint the blocks accordingly.

However, if you want to build a concrete and sod patio chessboard from scratch, try this do-it-yourself project adapted from our friends at the DIY Network. (For the sake of easy reading, we will again omit metric conversions.)

Whether your board is mowed on a lawn, or part of a patio, you're going to need chess pieces. Each player begins with 16 pieces: eight pawns; two bishops; two rooks; two knights; one queen and one king. You can purchase various life-size pieces. They can be made out of wood, resin or plastic. Or, if you have enough dogs, use them as your chessmen.

Author's Note: How to Make an Outdoor Chessboard

I play chess occasionally, but I mow the lawn regularly. I'm not sure whether I want to combine the two. Plus, I don't think my two dogs would like to be chess pieces. The new puppy is always knocking my Great Dane down. I guess that would be considered cheating if Bobby Fischer came to play.