Browse the article How Croquet Works 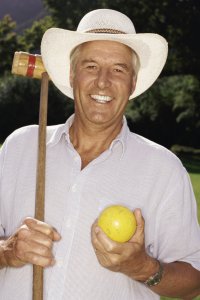 Don't be suckered by that friendly smile. He's about to straight-up crush you on the court. See more sports pictures.
Digital Vision/Digital Vision/Thinkstock

The World Croquet Federation's ponderously detailed "Full Rules for Golf Croquet" could be an excerpt from a U.N. treaty as complex as "Ending War Forever and Ever and Ever. Oh, and World Hunger Too, While We're at It." Example: The rules spell out 14 different striking faults – those are just the things you can do wrong between hitting the ball and getting out of the way so the next person can go. Four of those faults are so open to debate that there's even extra commentary explaining them. The rules also explain 14 points of etiquette to keep things civil and include a lengthy appendix with additional details on grading, handicaps and adjustments.

On top of all that, the WCF, which coordinates international play, recognizes a number of different variations of croquet. Apart from golf croquet, there's association croquet, garden croquet, six-wicket croquet, nine-wicket croquet and extreme croquet.

With all that in mind, croquet might come across as a complicated and boring game. Plus, thanks to everything from "Heathers" to French impressionist paintings of croquet players in suits and elaborate gowns, a lot of people associate it with backstabbing and snobbery.

But its heart, croquet isn't inaccessible – or vicious. All you need to play is a reasonably flat patch of grass and simple croquet set – and you can pick up a new, basic starter set for as little as $30. So whether you're sipping mint juleps and nibbling tea sandwiches out in the garden or just whacking some balls around over beers with friends in the backyard, there is a croquet game for you.

This is a common croquet court layout.
2012 HowStuffWorks

Obviously, thanks to all the different types of croquet, you're going to use different rule sets depending on how you want to play. But the basics are pretty similar across the board.

The standard size for a croquet court is 35 yards (32 meters) by 28 yards (25.6 meters). The equipment includes a mallet and ball for each player, and a set of hoops and a peg or two that stick into the ground. The number of hoops, also known as wickets, can vary depending on the type of croquet, but a six-hoop court is common. In a four-player game, the balls are blue, red, black and yellow, to be played in that order. In doubles competitions, the person hitting the blue ball is partnered with the person hitting the black ball, and red goes with yellow.

There are lots of variants on this four-ball, six-wicket setup. You can play with nine wickets (or another number of your choosing), and the field may have two pegs instead of one. Some sets follow a different color scheme – a common alternative is green, pink, brown and white, with teams playing green-brown and pink-white combos. Using a six-ball set, six people can play in three teams of two or two teams of three. Most six-ball backyard croquet sets add green and orange, which play in that order after blue, red, black and yellow.

Regardless of the number of balls or wickets, the goal is for players to get their balls through each hoop – in the right order and from the right direction – known as running a hoop. Then, the ball has to hit the final peg, after which it's pegged out and finished for the match. In six-wicket setups, each ball must usually pass through each hoop twice, once in each direction.

To play, competitors take turns as striker, using their mallet to hit their ball, and score a point every time they run a hoop. The person or team that pegs out first wins. If it's a timed game and no one makes it to the peg in time, the person or team with the most points wins. In a six-hoop game, players can score up to 13 points – one for each hoop (from each direction) and one for the final peg. 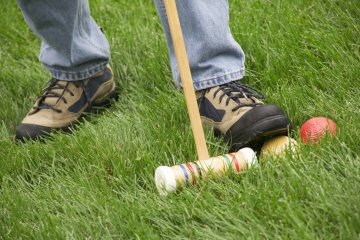 Croquet can be the girl next door or the prom queen. She's flexible like that. But she draws the line in certain places. Sometimes. Depending on what kind of mood she's in.

In croquet, a fault is a rule violation. If you accidently kick an opponent's ball, for example, that can be a non-striking fault. If any part of your mallet besides the end-face makes contact with the ball during gameplay, that's a striking fault. Depending on the rules you're using, different faults have different consequences and remedies. Sometimes players lose turns and points, but sometimes play simply resumes. In certain situations, balls are left as-is despite the mix-up, and in others they go back to their original positions at the discretion of the non-faulty party.

Depending on the rule set, if you send an opponent's ball through a hoop, your opponent may earn a point. In other versions of the game, you can earn extra whacks at your ball during your turn. For example, running a hoop could get you an extra shot. If you run the hoop and send an opponent's ball through it too – the other ball has peeled the hoop if this occurs – you may still earn a point but not get an extra stroke. But note: You can't generally save your shots for later. You take them when you earn them ... except in some situations, such as when you're playing with handicaps.

There's also the croquet/roquet method. If you hit another player's ball (called making a roquet) during your turn, you can put your ball right next to the roqueted ball. Then, holding your ball still with your foot, you can hit it and watch your opponent's go spinning away on the other side (aka taking croquet). It's physics in action (thanks, conservation of energy and momentum!) and it can give you a serious strategic advantage.

And don't get too far ahead after running a hoop – under some rule sets, your opponents may call offsides on the play. In some instances, players who go past the halfway point between one wicket and the next have to take a penalty shot.

A few variations are more about the field than how the game as played. Players can use markers to help keep track of things during the game. For example, corner flags in the four colors can assist competitors with directional guidance or simply spruce up the court. You can also place pretty clips on the wickets to help you remember which balls have run that hoop.

The basic rule of croquet scoring – you get a point every time you run a hoop – is pretty simple. But in (fancy pants) croquet, the placement of the hoops, as well as the order and direction the balls must pass through them, is very specific. You don't get a point if your ball goes through the hoop in the wrong direction or the wrong order, or if it doesn't go far enough through the hoop.

On rare occasions (although perhaps less rarely if you're a real pro) your ball may make it through two or more hoops in a single turn, earning a point for each hoop. But efficiency is also a factor, since whoever hits the final peg (and earns the maximum number of available points) first wins. This means the resting position of the ball in regards to the hoop can be as important as whether you've scored that point yet. If the ball doesn't go all the way through the hoop, while you await your next turn it'll be camped out in what could be a hazardous hotspot.

Handicaps are one way to affect a game's scoring and help even the playing field when competitors have different skill levels. To calculate the handicap for a six-hoop, 13-point game, players are ranked on a scale from 0 to 12. The 0s are the strongest players; the 12s are the weakest. For each handicap number, the player gets one extra turn. This system can become a little complicated in games that have more than 13 available points. In a nine-hoop, 19-point game, for instance, the ranking still starts with 0 and ends with 12, but the number of extra strokes varies from 0 to 19.

These bonus strokes, known as bisques, can usually be taken at any time during the game. But sometimes, players can't score points while using a bisque. When that happens, it's typically known as a half bisque. Especially for beginners, these extra shots are best use to get a misfired ball back to a better place on the court, or to set a ball up for a better shot on the next turn. Another possible use, though, is to roquet other players' balls out of the action. 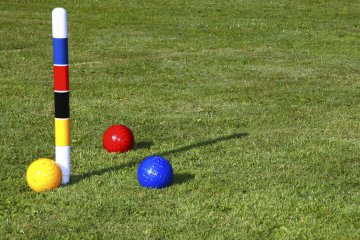 The peg is typically painted to help players keep track of the playing order. Obey the peg.
iStockphoto/Thinkstock

A backyard game of croquet probably isn't going to look much like "Alice's Adventures in Wonderland," with equipment that has a mind of its own and the Red Queen yelling, "Off with their heads!" But thanks to all the variations in rules and the field itself, it can get heated in a hurry. Here are a few tips to keep things mostly civil:

So get out there, have fun, and don't do anything that'll make someone want to swing a mallet at your head!

This article was both a lot of fun and kind of a pain to write. In terms of the latter, I do prefer topics that are a little more buttoned up and exact. Croquet is not. At all. On the other hand, I did get to spend a morning out in the yard playing croquet as research, which was both informative and awesome.