How to Choose the Right Swingset for Your Kids 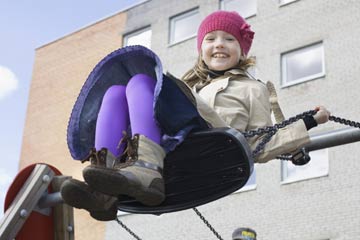 Most serious swingset injuries involve falls onto hard surfaces. When buying your swingset, think about ways to create a safe play surface.
© Mika/Corbis

Around 200,000 American kids visit hospital emergency rooms each year with injuries sustained on playground equipment [source: CPSC]. Whether you're buying your swingset new or searching for a deal on Craigslist, make sure you know the most common swingset safety issues.

The majority of serious injuries related to swingsets — and even the occasional fatality — involve falls onto hard surfaces. When you are choosing your swingset, think about ways to create a safe play surface. The CPSC recommends building a raised bed consisting of at least 9 inches (22.8 centimeters) of "loose fill material" like wood chips, shredded rubber mulch or sand. Since the fill material will settle over time, it will need to be replenished or replaced to maintain that 9-inch buffer.

All new swingsets sold in the U.S. should conform to safety standards developed by the CPSC. But if you are shopping for a used swingset, please keep these safety criteria in mind [source: CPSC]:

For lots more information about backyard fun and child safety, check out the related HowStuffWorks links below.

Author's Note: How to Choose the Right Swingset for Your Kids

I still remember the day we bought our daughter her very first piece of playground equipment. She was only 18 months old, but judging by the increasingly taller pieces of furniture she summited in our living room, she showed great promise as a competitive alpinist. We sought out a simple climbing gym with a slide where she could hone her daredevil skills. I was thinking 50 bucks, tops. Nearly $300 later, we were driving home from the toy store with a box strapped to the top of the car that was nearly as big as the car itself. After hours of setup, I encircled the thing with rubber mats and let her at it. She was in heaven. Our daughter recently turned 8, and I don't think I've given her anything that brought her more happiness than that giant plastic play set. As it did for toddlers number two and three.