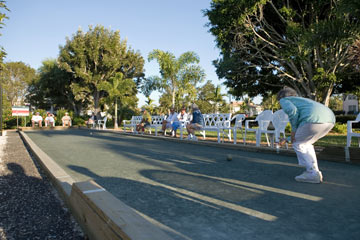 Bocce ball is a game of skill and strategy for both serious athletes and amateur enthusiasts. See more sports pictures.
Photos.com/Thinkstock

Few sports have a 5,000-year history and go really well with a shot of espresso or a glass of Campari. Bocce (pronounced bah-chee) ball is a game of skill and strategy for both serious athletes and amateur enthusiasts. It requires a certain degree of athleticism but is often depicted in film and advertising as a leisure activity for mature Italian men in New York City, Miami and Italy, of course, who roll the game's softball-sized balls while enjoying a drink with friends.

Also spelled boccie or bocci, and sometimes capitalized, bocce ball is an international game that can be played anywhere from a sandy side alley to a clay-soil or dirt park area to a paved court. Egyptians may have been the first to play an early form of bocce ball thousands of years ago, and from there it was likely picked up by the Greeks. They later shared it with the Italians, who formalized the rules and popularized the game. In Australia and the U.S., bocce ball is also considered the Italian form of lawn bowling, though the latter is a separate game usually played on grass with English rules [sources: Buckheit; Encyclopaedia Britannica; NYC Parks].

Although bocce ball is not an Olympic sport -- despite many petitions to have it included -- it has long been an official Special Olympics game. Players are challenged by the physical aspects of the game and gain confidence in using strategy, and the rules are straightforward and basic enough for coaches to communicate to special needs players at all levels. World championships in bocce ball or beach bocce ball also take place internationally.

Aside from special Olympians and those in Italian communities, bocce ball must be popular among many age groups in a range of places because it is considered the sport with the most participants after golf and soccer [source: Special Olympics]. Players in South America, the Balkans and Australia, among others, have their own names for the game of bocce and its balls. In most places it's played, however, people follow the Italian rules. We'll break those down in plain English, next.

One big score in the plus column for the game of bocce ball is how little space and how few sporting goods or equipment are needed to play. According to Bocce Standards Association and Encyclopaedia Britannica, typical court and equipment follow these guidelines:

According to the rules of the game, bocce ball is played between individuals, with one player pitted against another, or between two teams, with two, three or four players on each team. Each player or team gets four bocce balls, and often one side will have red ones and the other green, though colors vary. A team of four players may have each of their colored balls marked with lines so each player can recognize his or her own ball.

Once the court, equipment and players are in place, it's time to get rolling, or throwing, but what's the point of the game? Getting really close and scoring points, next.

New York City has about 40 bocce ball courts in its public park system, as well as areas set aside for lawn bowling and boules, the French version of bocce ball. From the 1920s through the 1950s, the city started setting aside park spaces for playing each of these similar but culturally different games, and players continue to make good use of the courts for recreation and competition [source: City of New York].

Game play starts after a coin toss to determine who goes first. Team one starts by standing behind the foul line -- 10 feet (3.04 meters) from where the throwing end of the court starts -- and throwing the small pallino ball. This first player then throws again but with a bocce ball, trying to get it as close as possible to the pallino ball without hitting it. All throws are underhand.

After all eight balls are on the court and play has ended, it's time to measure. Each individual's or team's ball that is closer to the pallino ball than its competitors earns one point. If there are two red balls closer to the small target ball than the four blue balls, the red side earns four points. No one scores if a ball from each team is at the same distance from the pallino ball; the equal distance cancels out the point [sources: Bocce Standards Association; Encyclopaedia Britannica; World Bocce League].

After tallying points another set starts. Sets repeat until a team or individual earns 12, 16 or 21 points. In tournament play, 12 or 16 points generally determine a winner, usually after three to five sets.

While all of this sounds easy enough, there are some tips to consider before blasting the opponent's ball away from the coveted pallino.

Object of the Game

Getting a bocce ball the closest distance to the pallino ball without touching it is the goal of bocce ball. You can use the sides to bank a play and even can knock an opponent's ball out of the way if it's close to the pallino. Likewise, your perfectly placed throw also is a target for defensive play or getting knocked out of the way. Getting as many bocce balls as close as you can to the target pallino ball earns the most points. 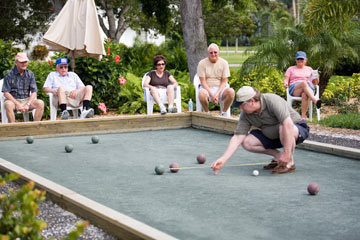