Can adults use a Slip 'N Slide?

Browse the article Can adults use a Slip 'N Slide? 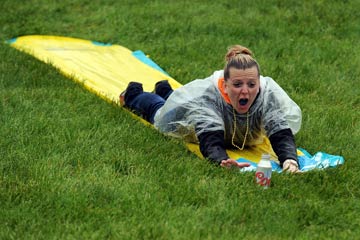 A race fan slides down a Slip 'N Slide in the rainy infield, prior to the 139th running of the Kentucky Derby at Churchill Downs in 2013. See more extreme sports pictures
Jamey Price/Getty Images

It's so hot the ice cubes in your glass of lemonade enter oblivion before you can wet your lips. Even the air conditioner can't keep up. Worse yet, your children have taken to lying about, whining in a pitch your psyche simply can't handle much longer.

Since you're sweating through summer solstice anyway, why not fully commit? It's time to launch a series of water-drenched shenanigans on your own front lawn.

The Slip 'N Slide, one of the world's simplest and most popular summertime inventions, can help your children (and you) survive the heat. Plus, it sets up in minutes and will soon attract your children's friends from within a six-block region.

Perhaps the most remarkable thing about the Slip 'N Slide is its homage to the effectiveness of advertising. Take a brightly colored box housing an equally vibrant plastic toy; add a few well-timed marketing photos and a pinch of nostalgia. Voilà! You're the proud new owner of a $10 toy that is probably not worth the price you paid.

In its most basic form, a Slip 'N Slide is a long, thin plastic sheet (usually about 40 inches wide and 25 feet long or 1 meter wide and 7.6 meters long) to which a garden hose is attached via a cylindrical tube on one side [source: Walsh]. Tiny holes in the tube let the water spurt out to ensure a slippery surface. The water collects in a shallow pool at one end of the sheet. Sometimes extra gizmos, such as tiny fountains that shoot from the sides of the plastic sheet or inflatable "boogie boards," are part of the package.

Slip 'N Slide users queue at one end of the plastic sheeting, get a running start, fling onto its watery surface and then slide until they come to a stop in the shallow pool at the end. It works best on a gentle, downward slope -- one that, naturally, is free of rocks and sticks [source: Wham-O].

There are some clear winners in this mecca of backyard fun: your children, their friends and your fragile psyche that couldn't handle any more whining to the tune of "I'm bored" or "There's nothing to do." But there is a definite downside, too. Adults aren't supposed to use Slip 'N Slides.

It was an ordinary summer afternoon when Robert Carrier, a boat interior upholsterer in California, arrived home from work.

The scene that greeted him, however, was anything but average. His son was doing belly flops down the family driveway, sliding toward the street. He'd used a garden hose to turn the painted concrete surface into an impromptu water slide.

It didn't take long for Carrier to bring home a safer solution: a 50-foot (15.24-meter) roll of vinyl-covered fabric his son could use to slide in the grass instead of the driveway.

Carrier eventually patented his invention and sold it to Wham-O, the same company that initiated the American love affair with the Hula Hoop and Frisbee. Wham-O introduced the Slip 'N Slide as a children's toy at the 1961 Toy Fair [source: Walsh]. Since then, millions of Slip 'N Slides have been sold, despite cautions from the U.S. Consumer Product Safety Commission and reports of serious injuries. Seven adults and a 13-year-old suffered neck injuries or paralysis between 1973 and 1991 after using a Wham-O Slip 'N Slide [source: CPSC].

In fact, Wham-O stopped making the water slide in the late '70s, after the first reports of injuries. In 1982, a toy company called Kransco acquired Wham-O and reintroduced the product in 1983 with a warning label that it was not for use by adults [source: Weiser].

A 1991 lawsuit brought by a man who became a quadriplegic after using a Slip 'N Slide led the commission to put out this warning in 1993: "Because of their weight and height, adults and teenagers who dive onto the water slide may hit and abruptly stop in such a way that could cause permanent spinal cord injury, resulting in quadriplegia or paraplegia. The slider's forward momentum drives the body into the neck and compresses the spinal cord."

After the lawsuit, the Slip'N Slide was once again taken off the market but was brought back in the 2000s, a perennial backyard favorite of children. It still comes in its trademark yellow form, as well as inflatable, sports-themed and multi-user versions. The current product is labeled for ages 5 to 12.

However, like other adventure-seeking adults, you could make your own water fun with a plastic sheet that is much longer than the store brand, and conceivably, safer for your spinal cord -- unless you take the whole contraption to level 11 by adding obstacles, ramps or baby oil.

Like the idea of a Slip 'N Slide, but want to make your own? Get a roll of heavy plastic sheeting from a home improvement store. Then wrap the sides and one end of the plastic over foam pool "noodles" and affix the plastic in place using peel-and-stick Velcro. Run water from the top of the slide, add a sprinkler if you'd like, and belly flop down the slide [source: Denmead].

I must have been one of the three children in the U.S. who didn't spend summer afternoons careening down a Slip 'N Slide. My recent excitement at filling in this missing childhood memory was, however, tempered when my research uncovered the rash of Slip 'N Slide spinal injuries that cropped up during the 1990s. Naturally, I rushed to the store to see if I could still purchase a Slip 'N Slide. Then I let my two youngest daughters spend an afternoon (injury-free, thank goodness) enjoying run/flop/slide antics. Duly warned by the CPSC, I abstained from any Slip 'N Slide activities. Funny, though, I did expect the Kool-Aid Man -- that beloved "spokespitcher" of the mid-1970s -- to burst through the backyard fence, sugary refreshment in hand.