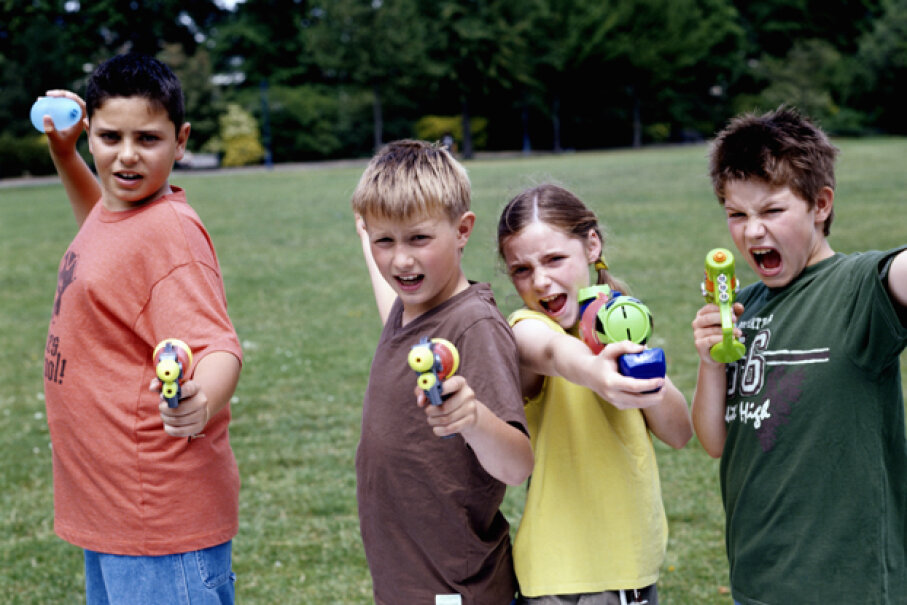 Water balloon fights are fun but there are other games you can play with water balloons. See pictures of waterfalls. Digital Vision/Photodisc/Getty Images

Summer heat plus water balloons? The only answer to this equation is "good times." We've discovered five water balloon games that are not only fun, but also likely to get all the players soaking wet. All you need to get started are some inexpensive water balloons.

Water balloons differ a little from air balloons. Both are made of latex, but water balloons tend to be elongated in shape and thinner in material, which allows them to break more easily. You can fill them from a faucet or hose with a nozzle. Just don't overfill them, or they'll burst before you use them.

While you and your kids are filling the balloons, you can even sneak in a little summer learning. Toddlers or preschoolers can get an early lesson in surface tension as the balloons fill with water and change in shape; they can compare the weight of a water-filled balloon and an air-filled balloon. Older children can estimate how many balloons they can fill with water in a minute -- and then find out. Or, they can gauge and test how full a balloon can become without popping [source: Funtastic Fun and Learning].

Once all these experiments are done, these games will keep everyone engaged. Who knows, a water balloon battle may even break out. 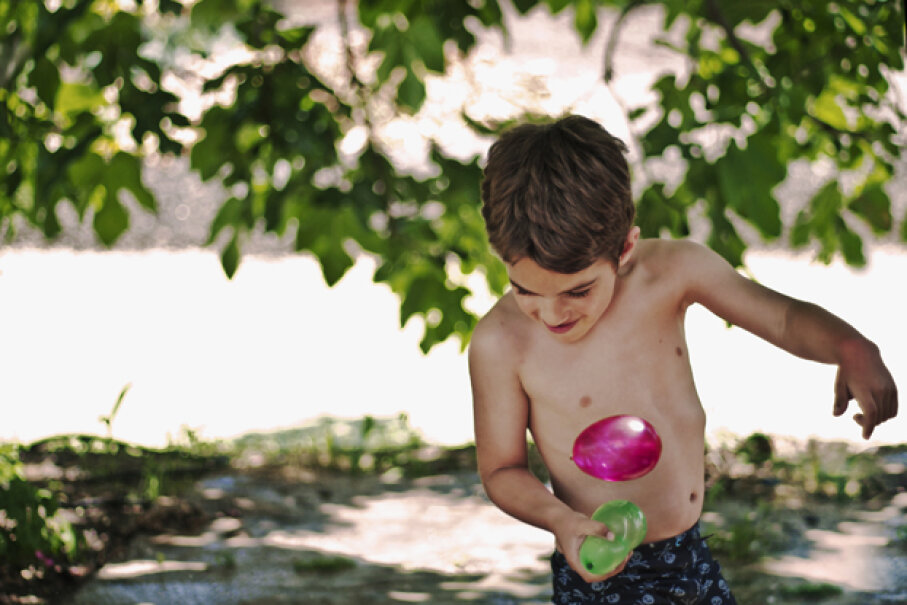 In a water balloon race, you have to get to the other side without breaking your balloon. elvira boix photography/Flickr/Getty Images

Need a game fit for a crowd? A water balloon race will fit the bill.

To get started, split four or more players into two even teams and have a dozen (or more, depending on the number of players) balloons filled and ready to go. Map out a course for the runners. The course can either be straight course and without obstacles that players can run at a sprint, or it can be winding and include obstacles to go around, over or under.

The players on each team will queue behind a starting line and, upon hearing "go," take turns running the course while holding a water balloon. (You can make it even harder by having the runner keep the balloon tucked under his or her chin.) The object is to get to the far end of the course and back without breaking the balloon. If the player succeeds, he or she hands the water balloon to the next player. However, if the balloon pops en route, the player must get a new balloon and start over. The first team to complete the course wins [source: PBS Kids]. 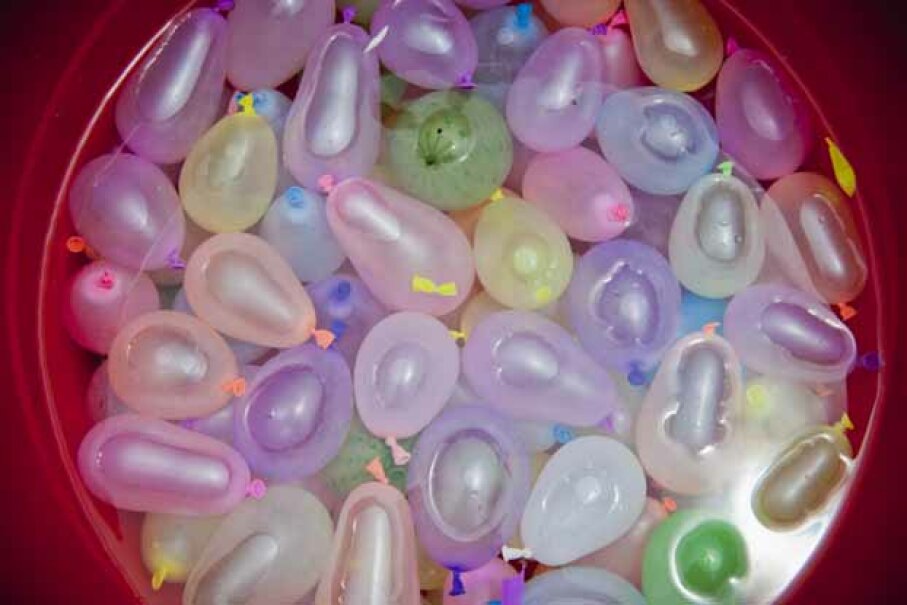 Who wants to a play a game of catch when scorching temps have turned the backyard into a veritable desert? If you're tossing water balloons, everyone! With this game, dropping the ball is a good thing.

To play, you'll need grapefruit-size water balloons and gallon-size milk jugs. Cut the bottom off the milk jugs so players can grasp them by the handles, turn them upside down and use them as "catcher's mitts." If you're really feeling crafty (or need an extra activity for the kids), have them decorate the milk jugs with ribbon and tape or stickers.

Divide the players into teams of two standing 3 to 5 feet (0.9 to 1.5 meters) apart. One player tosses the water balloon, while the other player tries to catch it in the milk jug without breaking the balloon. Older players can stand farther apart for an additional challenge. They may also to try it with the catcher blindfolded (the thrower tells the catcher where the balloon is headed).

The object is to see how many times the water balloon can be tossed and caught without breaking. But remember, a big splash is half the fun [source: Spoonful]. 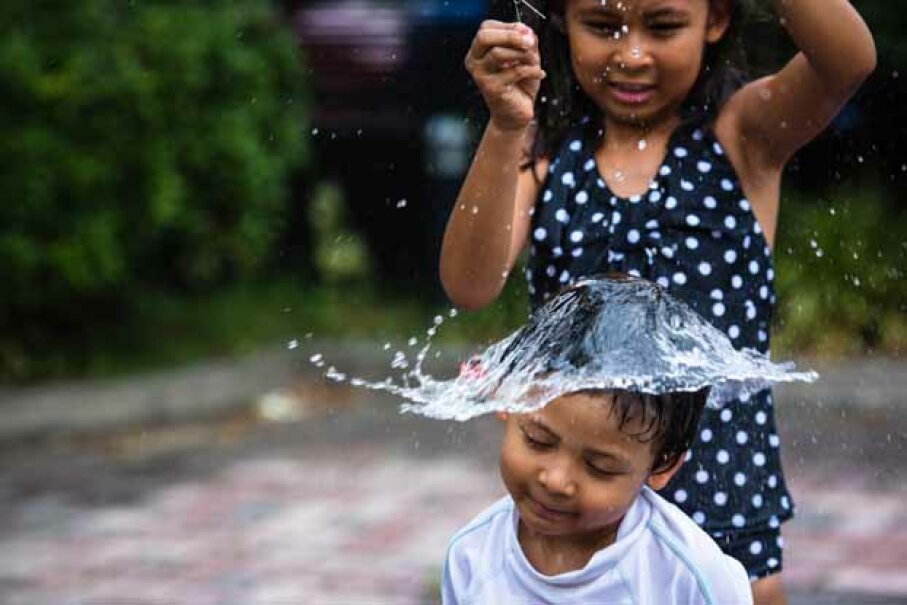 Don't be surprised if this game ends with a water balloon fight! Jason Weddington/Flickr/Getty Images

This game is a hot weather variant on the classic game of "hot potato." The object is to be the last dry player, which makes it a win-win for everyone. Plus, this can be played with three or more people, so it's great for a crowd.

Begin by having players sit or stand in a circle. Then, instead of simply passing a water balloon from player to player, they throw it across the circle to a specific player. As the tosses continue in a clockwise direction, it won't be long before a balloon breaks. If this happens, the player who either let the balloon fall or popped the balloon upon catching it is "out."

The game continues until only one (mostly dry) player remains [source: Shelby]. 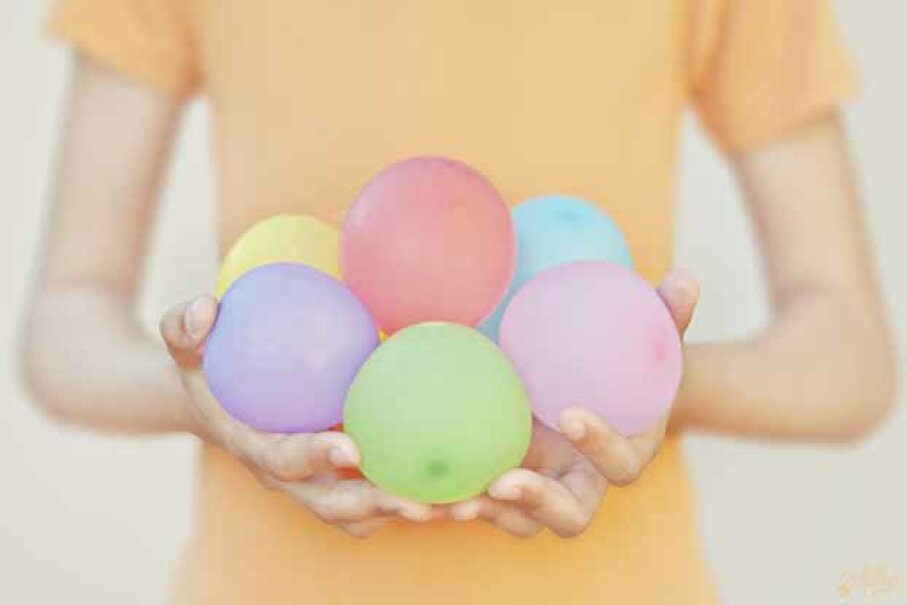 This game will remind you of an Easter egg hunt. Alicia Llop/Flickr Open/Getty Images

There's something thrilling about a game of hide-and-seek or a scavenger hunt. The same goes for a good old-fashioned Easter egg hunt. So why not adapt these ideas for summer?

Start the game by hiding orange- to grapefruit-size water balloons outside and providing plastic pails for the children to collect the balloons as they progress.

Nearly any "hunt" variation will work. Try hiding clues with the water balloons that lead children to the next cache, and so on. Or, simply say "go" and see who can find and return the most hidden balloons -- without breaking them.

For older children, try playing hide-and-seek. Give the "hiders" water balloons and have one "seeker" start counting down from 20. When the seeker reaches zero, she tries to find those who are hiding. As the players are discovered, they can lob their water balloons at the seeker. Everyone takes turns seeking, so everyone has a chance to get wet [source: Fantastic Fun and Learning]. 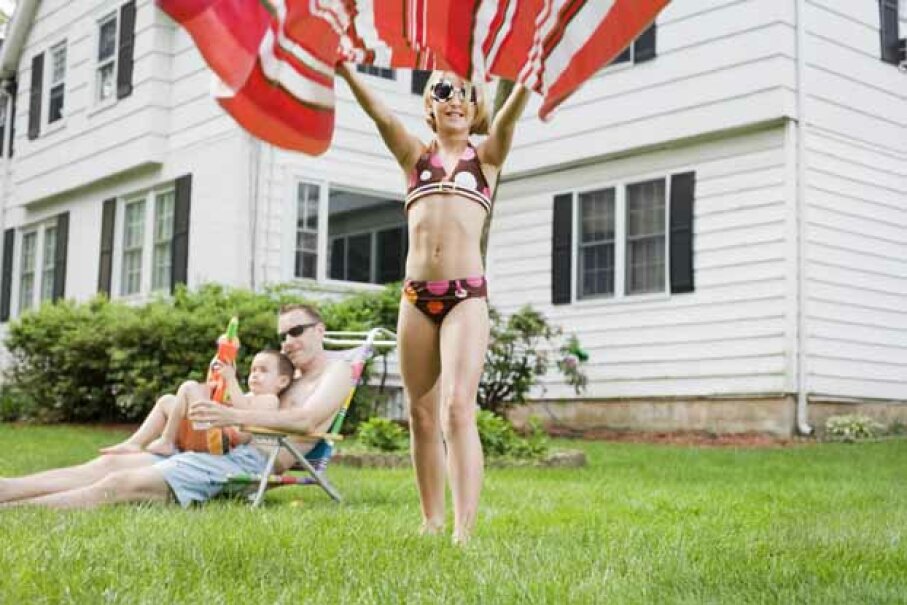 Like most water balloon games, the Water Balloon Towel Toss is delightfully simple. All you'll need is a couple dozen water balloons and a stack of beach towels (one beach towel per two players).

Divide players into teams of two, and have them hold the lengthwise ends of a beach towel. Place a water balloon in one team's beach towel so they can swing the towel back and forth, and when they've gathered enough momentum, send the balloon flying through the air toward the other team, which tries to catch it in their beach towel without popping it. If the team fails to catch the balloon, or if the balloon breaks, the throwing team gains a point. Play continues until a team reaches 10 points.

Because the object of this game is to see how many times the water balloon can be tossed between teams without breaking, we don't want to make it too easy. For each successful catch, have teams take a step farther apart from each other [source: Love, Play and Learn].

Until I began researching this article, I probably hadn't played with water balloons since ... well, college. And those antics weren't really geared for children. Writing about water balloon games, however, prompted a rediscovery for the entire family. So far, we've tried all five of these games, plus a few more that devolved into water balloon fights. Not only have we had a good laugh, but the lawn is looking great. All that water's been good for everyone -- and everything.