Browse the article 5 Soccer Variations to Play in Your Backyard 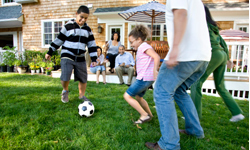 Your yard's a great place to play a soccer game, whether it's the classic version or a quirky variation.
David Sacks/Lifesize/Thinkstock

Soccer, or football, is the most popular sport in the world for good reason. If you can get a hold of a ball and a few players, you've got yourself a game. But let's be honest: Most of these pickup games aren't happening on manicured pitches under bright stadium lights. And why should they, when a lot of us have a perfectly acceptable field in our own backyard?

In the next few pages, we'll show you some soccer variations that can easily be adapted to your own yard. Some are a hybrid of soccer and another sport, some are designed for drills or to practice certain skills, and some are games that can be played solo. But all of them can be performed in a small, outdoor space no bigger than the average yard. So dribble the ball to the next page, where we'll try out our first soccer variation. 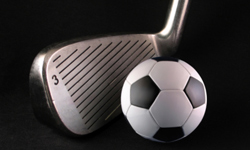 Nope, it's not quite what you're imagining, but it's still fun.
iStockphoto/Thinkstock

This game is a great one for developing both control and aim. It sounds like you're given free rein to whack the ball with a nine-iron, but not so fast. We're leaving out the distance aspect of golf and instead focusing on the part where we make the ball land where we want.

The game is easy. Lay a few used towels (or any other flat object) around the yard. The object is to kick the soccer ball so it stops directly on the "hole." Count how many "strokes" (kicks) it takes to get it there. Whoever has the lowest score at the end of the course wins.

This is a good game for a big backyard space, but remember that accurately passing the ball short distances is a skill, as well. A bonus: You can keep kids occupied for quite a while if the "course" is long enough or if you set up "bunkers" (a lawn chair in the path of the hole) or water hazards (kiddie pools). 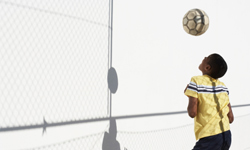 This variant is more of a solo, skill-building activity.
Roger Weber/Digital Vision/Thinkstock

This one's a pretty popular drill for those looking to improve their soccer games in general. It does require a fence or a, you guessed it, wall to kick the ball against, but it's a terrific way to practice receiving the ball when you don't have a teammate around.

Sure, the game is basically kicking the ball against the wall. Sounds simple. But the idea is that the ball is coming at you from different angles, which requires you to give those quick-reaction muscles a good workout. Another variation has you attempting to touch the ball differently every time: kick with your left foot, your right, your thigh, your chest and then try to head it. Or make up some variations. Throw the ball at the top of the wall and practice having it settle on your foot, or try to volley the ball against the wall without it touching the ground.

Of course, this could also be adapted to a few players scrambling for a ball. With a partner, simply try to return each other's shots. If you're in a group, try to get to the ball before anyone else.

Fear not: You don't have to be some sort of fancy-type with tennis courts and manicured grounds to play this soccer variation. You can most certainly set up the net with, say, a low-slung badminton net, a rope tied between two chairs or even a piece of lumber propped on two rocks. In other words, don't worry if your backyard doesn't look like the Kennedy compound.

Just like in tennis, you could play either singles or doubles. And the game pretty much follows general tennis rules. "Serve" (kick) the ball over the net, and the other team must volley it back in only one bounce and two touches. A point is scored by the server when the opposing team fails to return the ball legally.

For a harder version, make it a rule that you must volley the ball every time, meaning it can't bounce at all and only one touch is allowed per side. Soon, you'll run yourself ragged -- and will perhaps be a little quicker on your feet for your next game on the field. 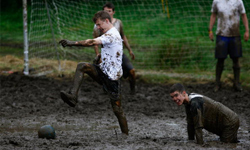 OK, this one's a bit of a cheat; not all of us have a bog in our backyard. But if you don't, don't think you're banished to staring wistfully out your window as you dribble your soccer ball in your living room.

Swamp football started out in Finland, where it was used to train military personnel and athletes. Why? Well, sprinting in the mud adds resistance, works different muscles and is going to get you in shape fast. It was only a matter of time, of course, before people started seeing the fun of playing soccer in the mud. The actual rules to swamp football -- and there are rules, as well as tournaments held around the world every year -- are fairly similar to a six-person-a-side soccer game. And while it must be fun to have a swamp in your backyard, for those of us who don't, the rules just call for a sopping wet pitch.

Indeed, the playground game of marbles can easily be adapted to a larger scale with a soccer ball and a backyard. This is a game that should probably be played with another person, although it's possible to do it alone if you're intent on finessing your passing and striking skills.

You'll need two soccer balls for this one. The first player will kick the ball out, and once it comes to a stop, it's the second player's turn to try and strike the first ball. If she hits it, she gets a point. If not, the first player gets an attempt to hit the second player's ball for a point. To make it a bigger challenge, play the game fast; there shouldn't be any significant pauses between strikes. You can also test yourself by making a rule that the ball must be hit before it comes to a stop.

These soccer variations should keep you (or those kids home on summer break) busy for a while.

Author's Note: 5 Soccer Variations to Play in Your Backyard

I grew up playing a lot of made-up games in the backyard. While these weren't your standard games -- baseball quickly became "Try to Hit the Wiffle Ball at the Littlest Kid," and basketball morphed into a winter game called "Throw a Snowball Into an Unsuspecting Face" -- we were pretty strict about enforcing the rules. With these backyard soccer variations, I encourage the rules and the features of the games to be very loosely interpreted. Make up whatever suits the yard and the player. And leave the littlest kid alone.