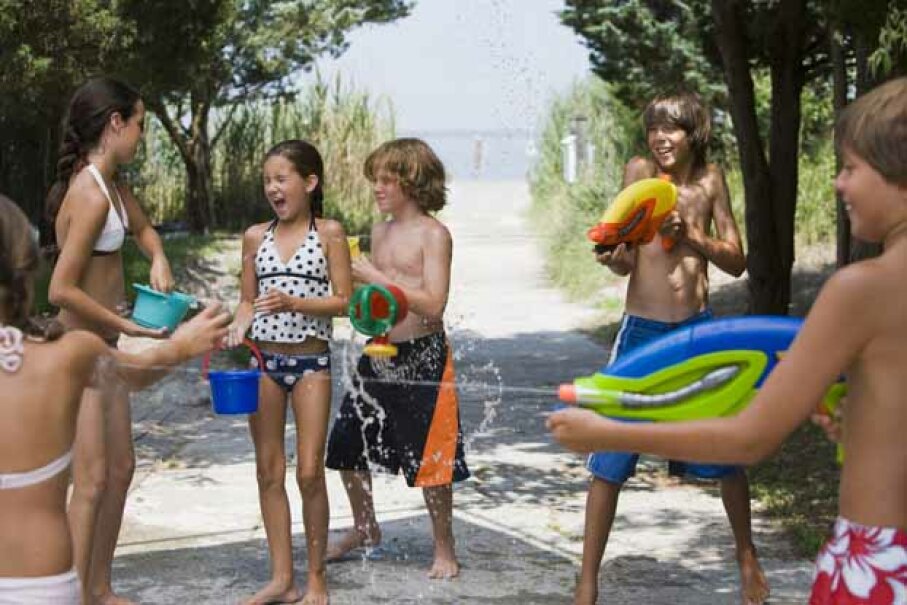 Water games are so much fun! See pictures of classic toys and games. Jupiterimages/Comstock/Thinkstock

Your family has spent those first few heady days of summer in full couch potato mode. But now that you're all experiencing cartoon and cereal overload, it's time to get those muscles moving before they atrophy into SpongeBob-like weakness. And what better way than with some great backyard water games?

These water games aren't your ordinary run-of-the-sprinkler versions. They're challenging, fast-paced and -- best of all -- require supplies you probably have on hand anyway. We'll start with a liquid twist on a land-based favorite. 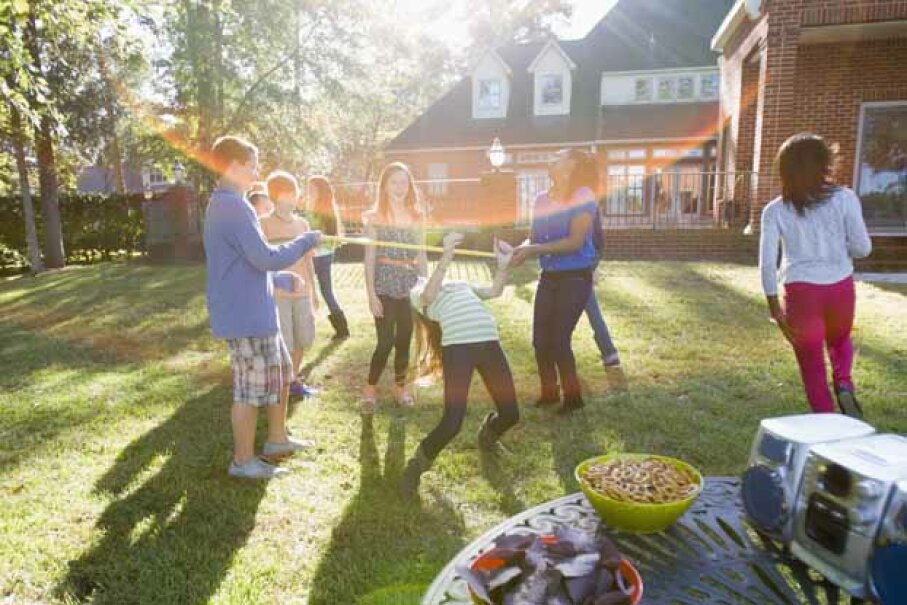 Water limbo is the wetter cousin of the classic party game. © Kevin Dodge/Corbis

Limbo, limbo, lim-bo! It's nearly impossible to try your luck passing under an increasingly lower limbo stick without the refrain of "Limbo Rock" by Chubby Checker running through your head.

Unlike the game that often accompanies this vintage tune, our version uses a stream of water from a garden hose as the "limbo pole." Start with the stream of water at a height children can easily duck under (a spray attachment is helpful). Then lower it a few inches toward the ground with each passing round. Players must bend backward, backs arched, while passing under the water without touching it. For toddlers and preschoolers, you could vary the rules by allowing them to bend forward instead [source: Family Education]. 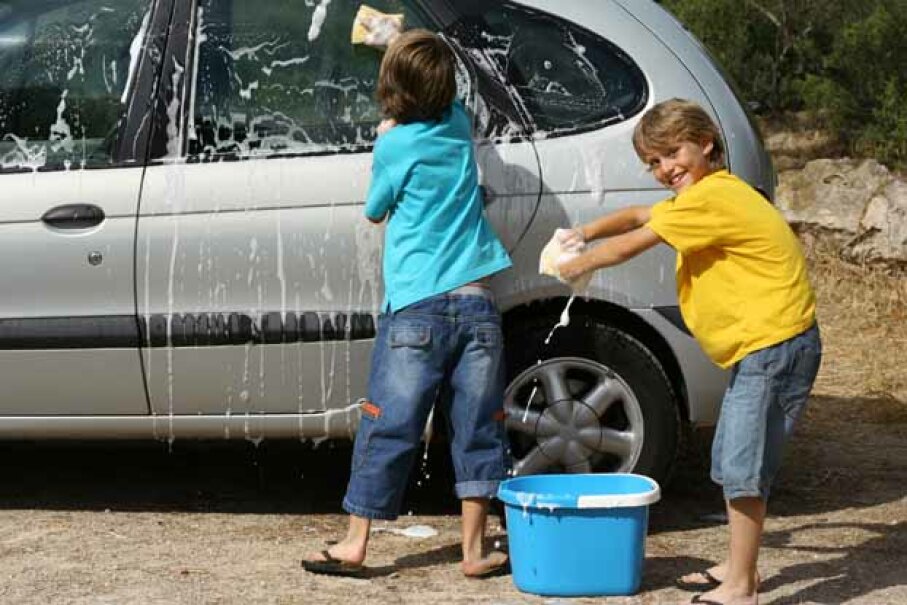 After your kids play sponge splash, have them use their bucket and sponge in another fun game -- washing Mommy's car. iStockphoto/Thinkstock

You won't believe how much fun you can have with a sponge. And we're not talking teensy kitchen sponges, either.

Using a couple of large sponges designed for washing a car (you'll need one per player) and two pails, you can play a soggy game of sponge splash. Simply grab a sponge and stand about 8 feet (2.4 meters) from each other and place water-filled pails on the ground, one at each player's feet. To begin the game, dunk each sponge in the pail and then try to toss it into your opponent's pail. Succeed, and you'll gain a point. The first player to reach five points wins. Bonus: Even if you lose, you still win by getting soaked.

For a fun variation on this game that works well with six or more players, try a no-hands sponge relay. Players lie on their backs on the ground to form two rows. Starting at one end of each line, they'll pass the soaked sponges from one player to another using only their feet. The players to transfer the sponge to the end of their line first win [source: Disney]. 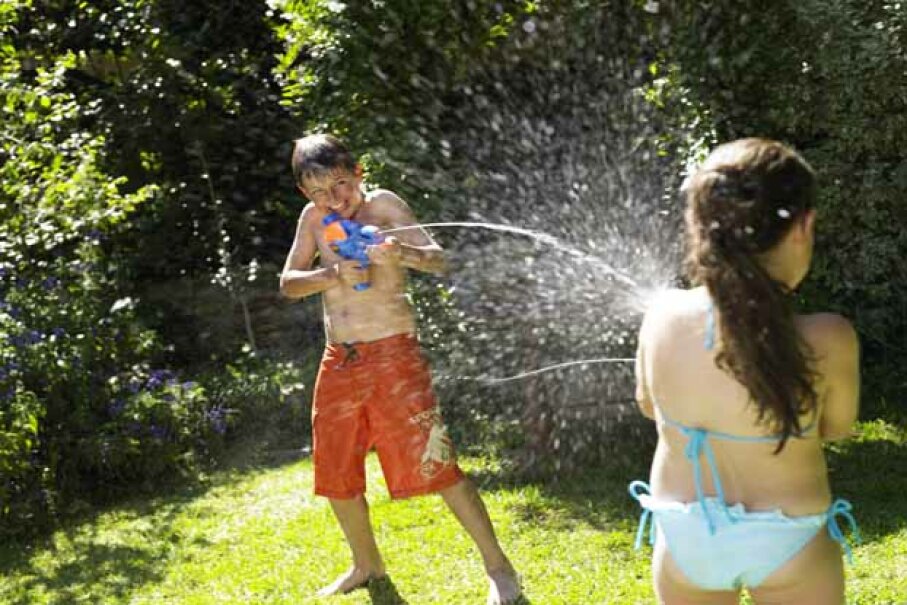 Think the only place to cool off outdoors in the summer is a swimming pool? Not so fast.

Using inexpensive water guns -- especially the "super soaker" kind -- you can not only get wet, but also put a fun twist on other backyard games. Take freeze tag, for example. First, give every player a water gun and plenty of room to run. Watch out: You can be "caught" by the water spray from another player's water gun, and then you must freeze. The only way to become unfrozen is to have another player squirt you with their water gun. While this game doesn’t have a clear-cut “winner,” it’s great for groups. 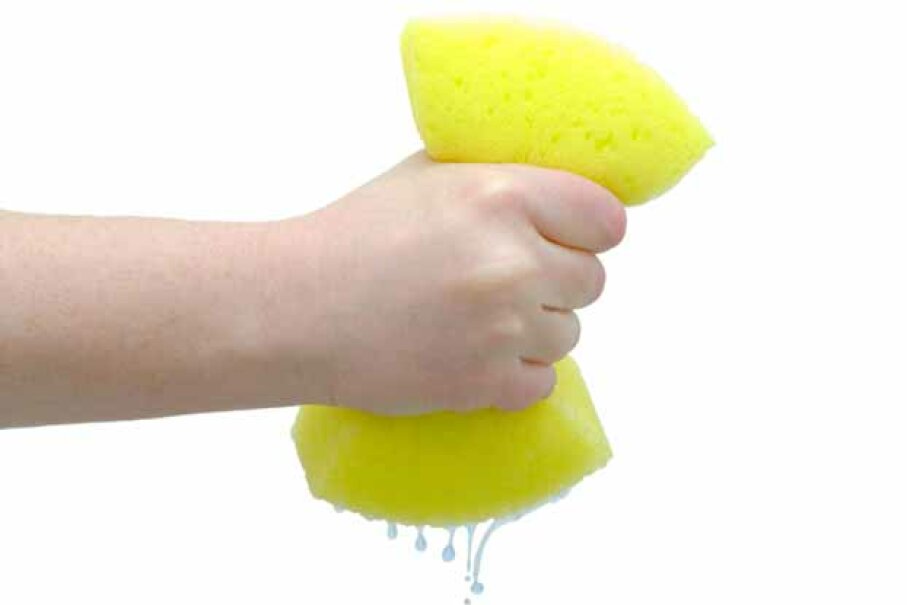 Drip-drop-drench is played just like duck-duck-goose -- but with a dripping sponge. Hemera/Thinkstock

Remember playing duck-duck-goose? One player is designated as "it" and walks around a circle of children sitting crisscross applesauce on the ground. The player who is "it" touches the head of each child as he walks behind them, saying, "duck" to each one until touching the head of one unsuspecting child and yelling, "goose." The child designated "goose" leaps up and races his opponent around the circle. The player who reaches -- and sits down in -- the empty spot first, wins. The standing player becomes "it" and continues the game.

Now imagine playing this game with a sponge. Holding a soaking wet, large sponge, like the kind used to wash cars, a player touches the head of each child as he says, "Drip, drop." When he gets to player who'll be the "goose" he adds, "Drench!" and squeezes the sponge hard on the "goose's" head. At that, the child jumps up and races the player who is "it" around the circle to fight for the empty spot [source: Webster]. 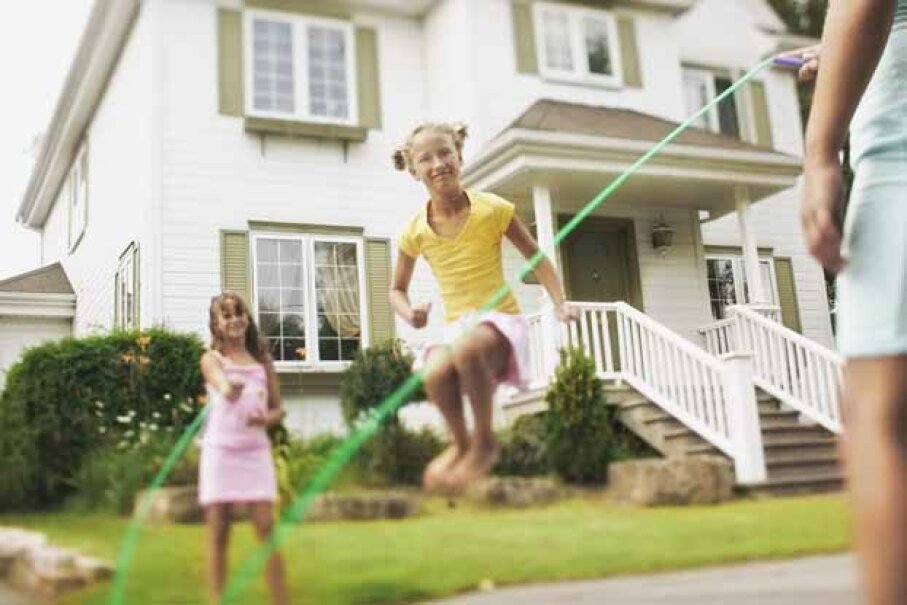 Jump rope is a lot more fun -- and challenging -- if you're holding a cup of water in one hand. Jupiterimages/Brand X Pictures/Thinkstock

For this game, you'll need at least three participants and a few simple things: water, plastic cups and a long jump rope (the kind built for one person to hold at each end).

To begin, select a person to jump the rope. While the other two players twirl the jump rope, the person in the middle jumps the rope six times -- while holding a full cup of water. The game ends by judging which of the participants completed six jumps with the most water left in their cup. Although the person with a full cup wins, we'd argue the players who get soaked are the real winners [source: Disney].

My daughters invented a backyard water game that, while surely replicated somewhere else in the world, was new to their friends. They placed an oscillating sprinkler under the trampoline, donned their swimming suits and spent the afternoon bouncing around. The sprinkler not only soaked the trampoline and made it perform differently for their acrobatic tricks, but it also soaked the girls. A win-win, in their book. And mine.