by Dave Roos
Prev NEXT
1 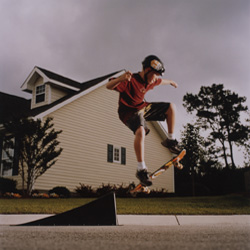 Even on the smallest quarterpipes, safety should be paramount.
Mint Girl Productions/Getty Images

Safety should really be at the heart of each step of planning, building and using a backyard skate park. Safety starts with the planning process. Sure, it sounds cool to build a 20-foot (6.1-meter) halfpipe. But have you ever ridden on a 20-foot halfpipe? How about your friends? Don't plan on building anything that will guarantee a trip to the hospital. Plan to leave a lot of space between skate park components, and don't build where there are overhead obstacles like tree limbs or electrical wires.

During the construction of your backyard skate park, ensure that you and everyone involved in the project is aware of basic safety precautions. Don't let inexperienced and younger helpers use the jigsaw. That's the most dangerous tool that's required to make most wooden components. Always wear protective glasses when operating the jigsaw. And always unplug the jigsaw or remove its battery pack before making adjustments to the blade or replacing the blade.

If you decide to use concrete to build your backyard skate park, wear long sleeves, long pants, gloves, and protective glasses, since wet concrete can irritate the skin and eyes [source: SkateParkGuide.com].

Once the backyard skate park is finished, you should strictly enforce a helmet and pads rule for your kids and their friends. Helmets are a critical component of skateboard safety. You can recover from a broken bone or stitches, but a brain injury is irreversible.

For lots more information on skateboarding and backyard fun, explore the links below.

When I was a kid, the older boy across the street and his dad built a 4-foot quarter pipe in their driveway. I begged my parents for a skateboard for my birthday, and they went along with it, buying me a Kmart special that was still the coolest thing I'd ever laid my hands on. As I tried to stay upright, making tentative turns in my driveway, I would see the kid across the street pulling wicked tricks on his ramp, stalling for a second on the lip or turning a quick 180 at the top of the ramp. I dreamed of the day I would be good enough to walk across the street, roll up to that ramp and pull some insane air. But that's all it ever was for me -- a dream. Turns out that falling down hurts, and pain isn't really my thing. So much for Extreme Dave.