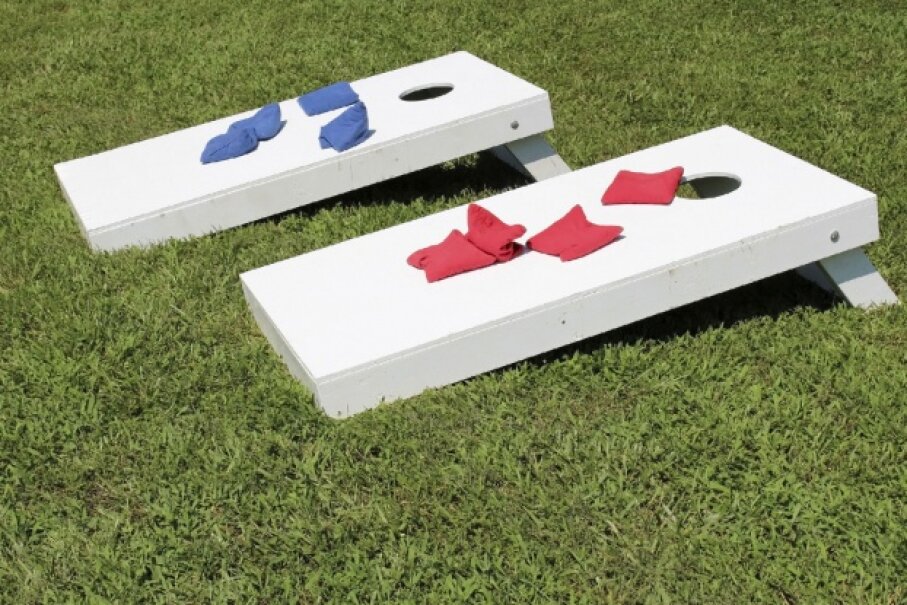 Cornhole -- also known as corn toss or bean bag toss -- takes up little space and can be played while still holding your plate of cake. ©iStockphoto.com/SarahPage

If your summer isn't complete without the sounds of kids splashing in the pool, the smell of hot dogs cooking on the grill, and a few friends over to enjoy a sunny afternoon, you're not alone. Sixty percent of Americans are excited to fire up the grill this summer, and it should come as no surprise to any of us that roughly 38 percent of all the hot dogs sold in the U.S. are sold between Memorial Day -- considered the unofficial start of summer -- and Labor Day -- considered the last summer weekend. They're the third most popular food we like to grill, behind corn on the cob (No. 2) and cheeseburgers (No. 1) [source: Applegate]. But garden parties aren't only about the food; they're also about the company. Summer days are perfect for little-to-no-skill–needed lawn games with family and friends in the backyard, and we have 10 easy, do-it-yourself game suggestions beginning with the oddly-named pickleball (no actual pickles are involved, which means more for your plate). 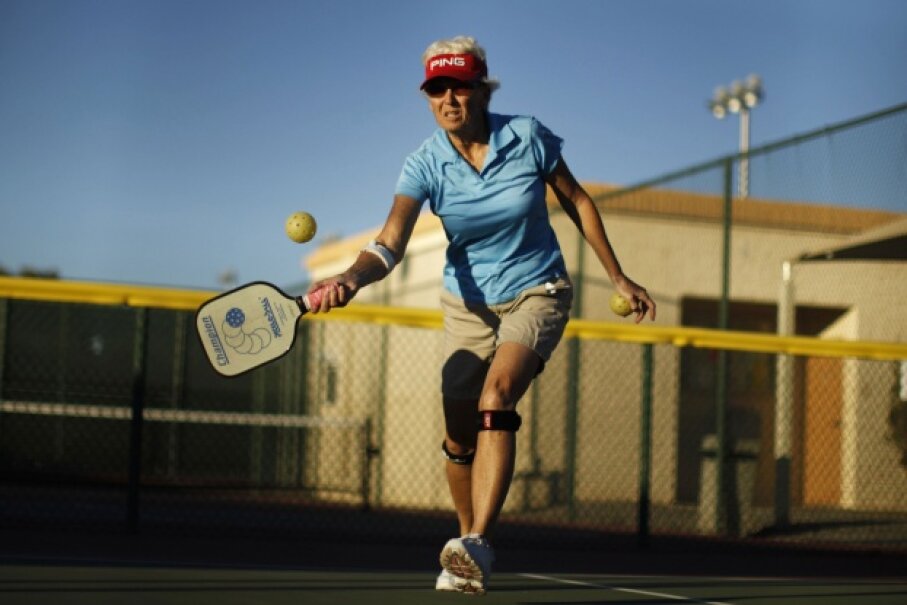 Pickleball is played with a paddle and a ball similar to the ones used for whiffleball. No actual pickles are involved. © LUCY NICHOLSON/Reuters/Corbis

The very first pickleball court was built in the backyard of a man named Joel Pritchard, in Bainbridge Island, Wash. during the winter of 1967, and you can easily build one in your very own backyard [source: Barberio].

Pickleball is a paddle game, played singles (with 2 players) or doubles (with 4 players); it's a combination of badminton, tennis and table tennis (ping pong), and to play you need paddles, a perforated plastic baseball (like you'd use in wiffleball), space for a court the same size you'd use for playing badminton and a net -- no actual pickles are involved. Portable, lightweight nets designed for pickle are available for non-permanent at-home backyard games. 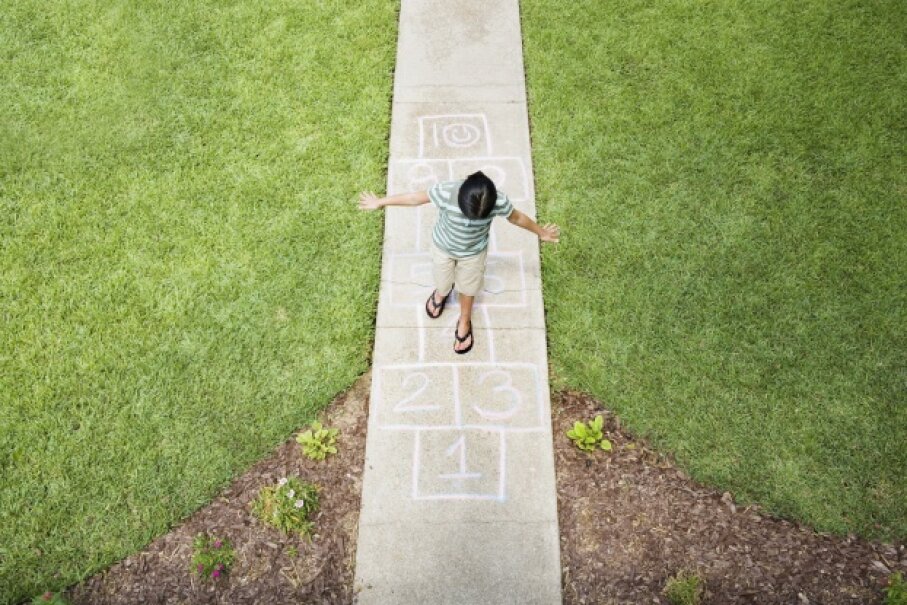 Hopscotch is easy to set up and play, is fun for all ages, and is an excellent balance workout. ©Steve Hix/Somos Images/Corbis

Hopscotch is a game of balance; the object is to be the first player to successfully hop from point A to point B -- and back again -- without hopping on any of the court lines or losing your balance.

Hopscotch can be played alone or with any size group of players, and all that's required is a small object such as a stone, coin or your keys to use as your marker (in some neighborhoods this object is known as a 'potsy'), and a simple court (drawn easily with chalk, or for a more permanent solution lay down stone tiles). While the longest hopscotch court measures in at 18,064 feet (5,506 meters), in your backyard you'll need a much smaller space: The court most Americans are familiar with is a 10-foot (3-meter) long by 3-foot (just shy of 1 meter) wide rectangle that's been divided into 10 sequentially numbered spaces [sources: Guinness World Records, SportsKnowHow]. 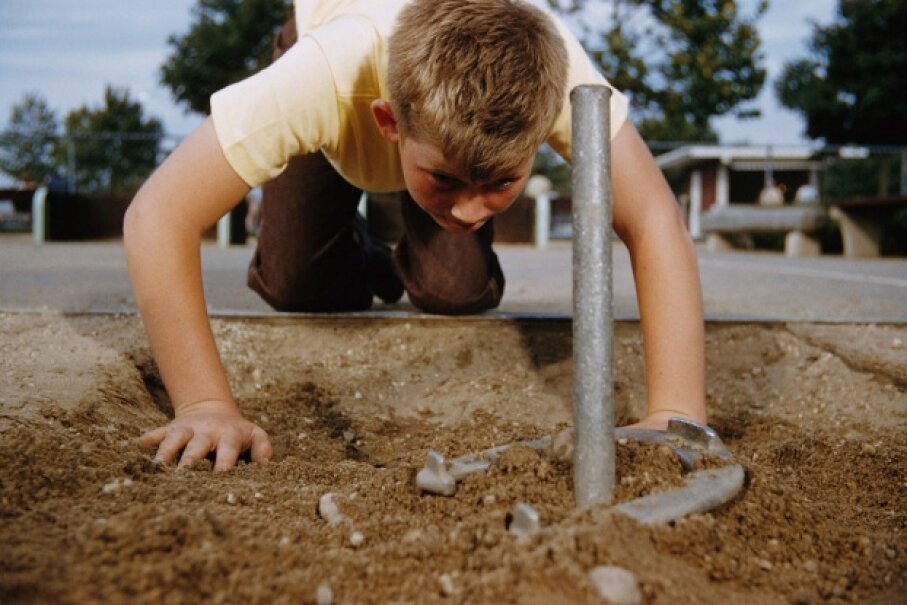 Horseshoes have been entertaining people for hundreds of years, and the game is just as fun as ever. © William Gottlieb/CORBIS

During a game of horseshoes, players take turns throwing (called pitching) two horseshoes at a target (a stake in the ground). There are more than 15 million horseshoe pitchers across North America, playing both casually and in organized teams, and you can join in at home with a DIY pit in your backyard [source: NHPA]. Horseshoes is a lawn game played on a court, 46 feet (14 meters) long by 6 feet (just about 2 meters) wide -- but since that size might not be ideal for at-home players, backyard dirt or sand courts are often much smaller.

During a single game you may pitch as many as 3,000 shoes, which as it turns out can be a fun way to get a good workout [source: NHPA]. If pitching shoes doesn't seem like much work, consider this: A horseshoe weighs in at about 2.5 pounds (1.1 kilograms), and if you play to 40 points, you'll throw two shoes for roughly 50 innings, which could burn as much as 150 calories every hour of gameplay [sources: Lanhum, Krautwurst]. 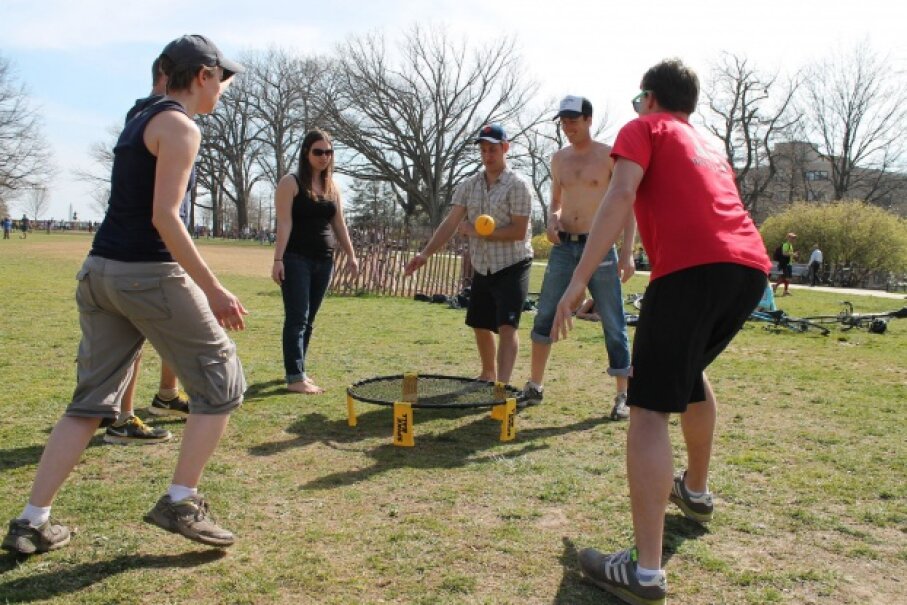 It's said Spikeball is a combination of volleyball and foursquare with a dash of trash talk thrown in -- it's a great game to play at the beach but can just as easily be played at home in your backyard.

It's played with 4 people -- two teams of two -- with a taut, ankle-level, Hula Hoop-sized net placed between teams. The net looks similar to a mini-trampoline with a net instead of a jumping base. Gameplay goes like this: Team A serves the palm-sized ball into the net, and Team B has 3 hits (if needed) between the two players to return the ball by bouncing it off the net back to the other team. The first team to score 21 points (by a margin of 2 points) wins [source: Spikeball]. 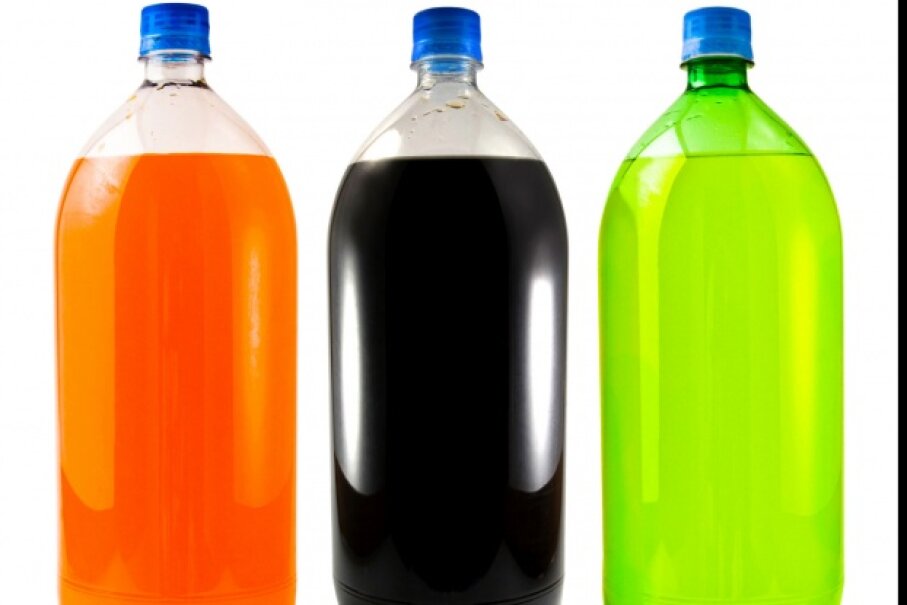 After you enjoy the soda, refill empty bottles with gravel or sand for a game of lawn bowling. It might be the most fun you ever have recycling. ©iStockphoto.com/travismanley

Leftover soda bottles from your most recent summer barbeque? Put them to use in a game of backyard lawn bowling -- you'll need 10 2-liter bottles, and the empties only, please.

To turn soda bottles into pins, first give them a wash and dry, and then fill each bottle with a little gravel or sand -- the amount isn't scientific; you're just trying to weigh them down to reduce the odds they'll blow over (or away) in the wind before you can knock them down with the ball. If you want fancier pins, remove the labels from each bottle and paint them with plastic-friendly paint -- try white with two red stripes for a classic pin style, paint them the colors of a rainbow (plus white, brown, and black to bring your list of colors to 10) or take advantage of the clear plastic bottles and fill them with decorative items. 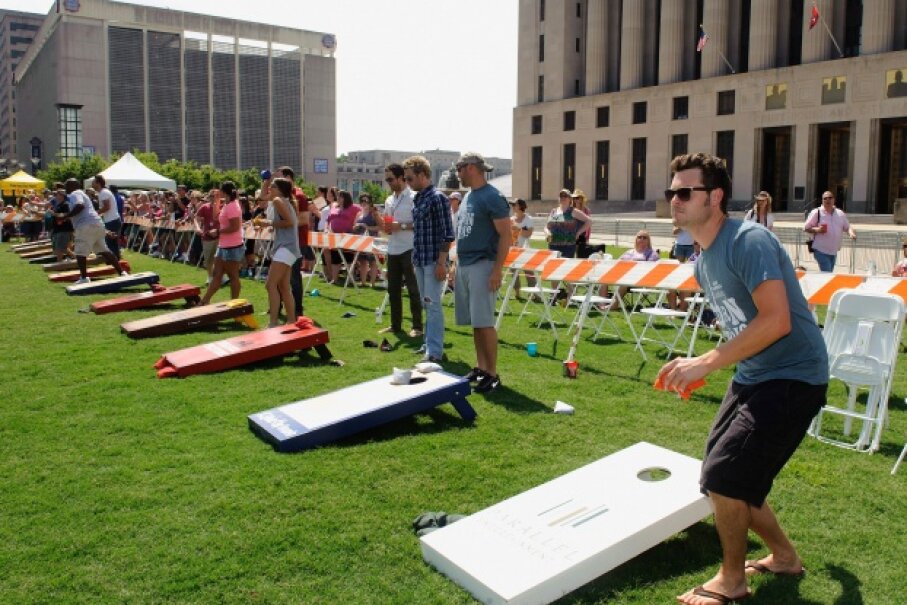 You may not realize that cornhole is incredibly popular -- as evidenced by this celebrity tournament in Nashville, Tenn. © Erika Goldring/Getty Images

Cornhole, also called Corn Toss, is a backyard game that's a great addition to barbeques or any summer get-together; it's a casual beanbag-toss game, where small beanbags are thrown at a raised, rectangular wooden board with a hole in it. For a good game, find a comfortable stance, relax and put a flat spin on the bag when you throw it.

To set up your own game of backyard cornhole you could buy a set with a platform and bags, or build your own set. If you want to tackle your own cornhole game platform construction, you'll need a rectangle made from half-inch plywood and measuring 4 feet (1.2 meters) by 2 feet (0.6 meters). Place the front of the platform on 2.5- to 4-inch (6.4- to 10.2-centimeter) risers; the back of the platform should also be elevated, but on 12-inch (30.5-centimeter) risers. Bags should be 6-inch (15.2-centimeter) squares [source: McGilvray]. 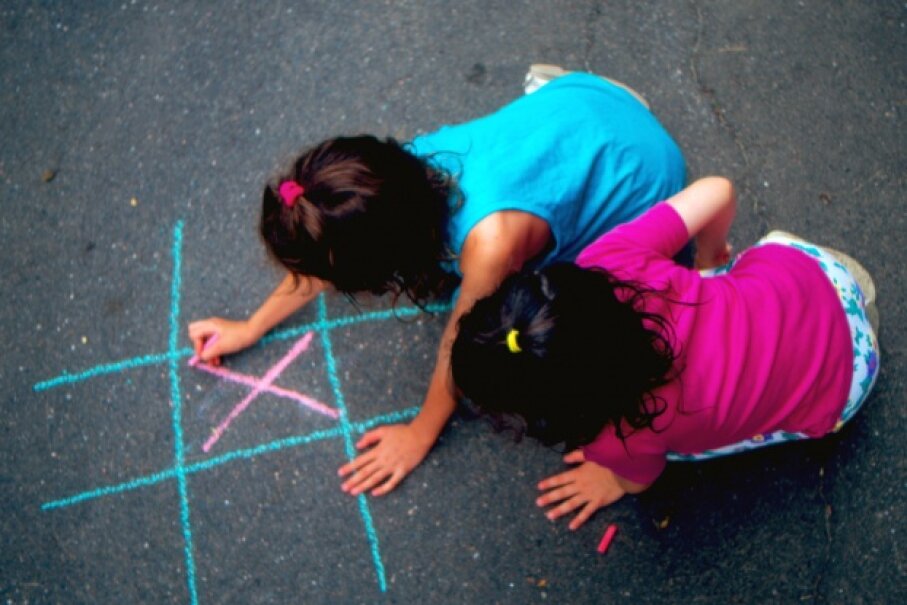 The beauty of tic-tac-toe is that you can set up a game anywhere and be playing in minutes. © Education Images/UIG via Getty Images

A game of tic-tac-toe is played on a 3 by 3 grid; players take turns marking Xs or Os and the first player to get three consecutive marks -- in a straight line or diagonal -- wins the game. Games can be played anywhere, drawn on a piece of paper or even enjoyed outside as a garden game. Designing a tic-tac-toe board in your yard is as easy as choosing 9 flat, square tiles to use as the grid (while you could opt for stone you could also use flooring tiles, leftover wall tiles from a kitchen or bathroom remodel, or skip the stones altogether and cleverly cut your grass in a grid pattern). Markers -- you'll want to have five Xs and five Os -- could be stones (natural or hand painted by you), flowers or any other object you'd like that's outdoor friendly. 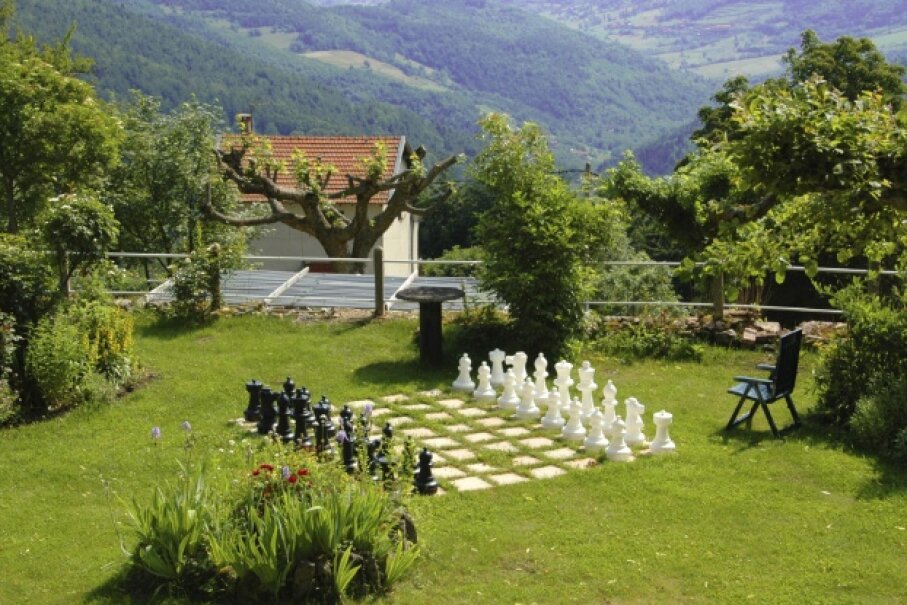 If you find you really love lawn chess, you might find yourself thinking about a permanent installation. ©iStockphoto.com/DigiStu

Chess is played on a 64-square board where the squares alternate in color. Each player begins with 16 pieces: Pawns are the most common -- there are eight, followed by two bishops, two knights, two rooks, one queen and one king. A game of giant lawn chess is played just the same as any other game of chess: Two opponents play until one player checkmates the other player's king (which means the king has no further options for escape, and without moves the game ends).

Outdoor chess boards can be mowed into your lawn, or could be created with wooden or stone tiles. Sets with interlocking teak or plastic board pieces and markers are also available for patio-friendly games. 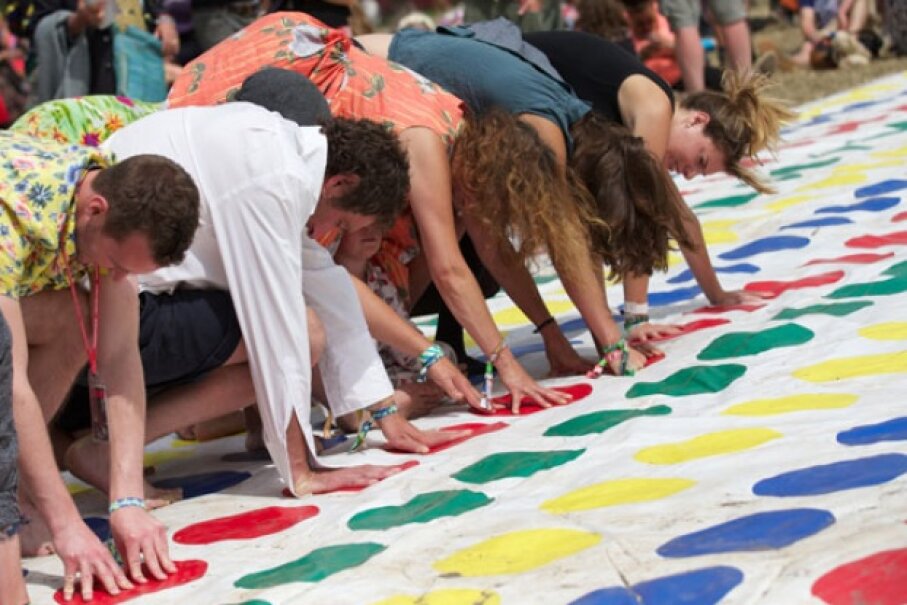 You could drag a regular Twister mat outside to play, but a few cans of spray paint and an outdoor space can save your indoor mat from wear and tear. © ANDREW COWIE/AFP/Getty Images

Left hand, red. Left foot, yellow. Take Twister to the backyard; turn the flexibility-challenging game into a lawn game for your next garden party with a few cans of spray paint; red, blue, yellow, and green are traditional to the game, but if you're worried about how well green paint on your green grass will show, switch things up and try white. Spray 24 circles on your lawn -- like the original game, that's four rows, one of each color, with six circles per row), or make things a little more professional looking by measuring and marking straight rows and creating a cardboard stencil for painting. Choose who calls first and get playing. 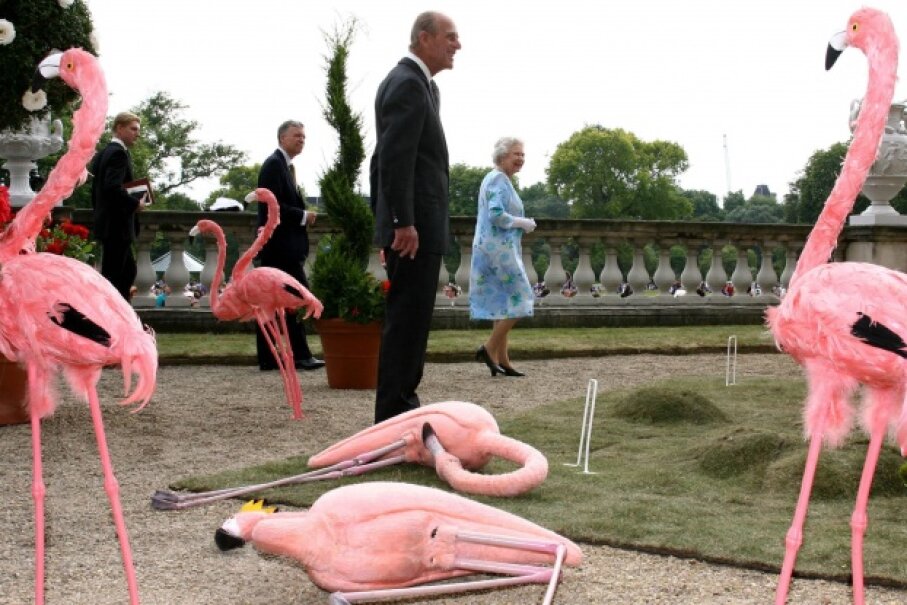 If your croquet game has enough panache, royalty may stop by for a game. © Anwar Hussein Collection/ROTA/WireImage

Croquet was once thought to be a scandalous game, one of the first where men and women could play together -- so naturally, it was banned at one time. No longer worried about couples canoodling in the bushes, creative croquet players have taken the game beyond what you'd normally play in your yard; cross the game of croquet with a game of miniature golf and you get a hybrid called crazy croquet.

Croquet is a lawn game where balls are hit through wickets -- and so is crazy croquet. A crazy game can be played with the balls, mallets, posts and wickets in a single croquet set (additional sets may be needed if you plan to play with a big group), but it's played on an obstacle course with ramps and plateaus built from random objects such as plywood, bricks or rocks you've collected.

When I was growing up, we had a few outdoor games to play in the backyard during every summer vacation; baseball, badminton and of course the Slip'n Slide -- but all of these games require your full attention. As an adult, games that can be played while holding a small plate of food or a drink seem much more appealing for summer party fun, and I especially want to try crazy croquet.