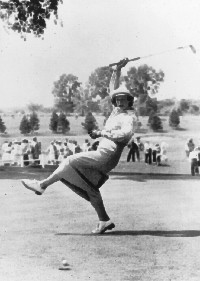 It is not surprising that Mildred "Babe" Didrikson Zaharias made a smooth transition into golf -- she was one of the rare athletes who mastered more than one sport.

Didrikson was an All-America basketball player in high school, a proficient swimmer and diver, an expert rifle shot, a boxer, a speed-ball softball pitcher, a top-notch bowler, and a tennis player of championship caliber.

Track and field, however, was where she made her initial impact on the sports world. In the 1932 national track and field championships, she placed first in eight of 10 events she entered.

It was two weeks later that the young Texan became a truly international star. In the 1932 Olympic Games in Los Angeles, Didrikson placed first in two events and a controversial second in another.

In going for the gold, she set a new world record in the javelin throw, broke the old world record for the 80-meter hurdles in winning her heat, then broke that record in the finals. She tied for first in the high jump but was then penalized for diving over the bar head first; she settled for the silver medal.

Cashing in on her new-found fame, Didrikson played the vaudeville circuit for a time, dancing and playing the harmonica. (At age seven, she had been a harmonica soloist on a Texas radio station, and she was a professional-level tap dancer.)

More interested in sports, Babe left show business and played on a professional basketball team as well as some exhibition baseball. She pitched for the House of David team and threw an inning's worth for the Philadelphia Phillies in an exhibition game against the Brooklyn Dodgers.

Then, in 1934, Didrikson turned to golf, which she had been playing on and off for a number of years and for which she, of course, exhibited a tremendous talent. In 1935, Didrikson (she would add Zaharias to her name in 1938 after marrying George Zaharias, a professional wrestler) went on a golf exhibition swing with Gene Sarazen.

Although not yet a finished golfer, she could hit the ball distances equal to that of many men players. Her power was a great attraction and amplified her nickname, "Babe," which came after she hit five home runs in a baseball game. "When I want to really blast one," she once said, "I just loosen my girdle and let 'er fly."

However, if she was going to compete in golf at a championship level, she would have to refine the rest of her game. Zaharias took lessons from Stan Kertes, a fine, albeit unheralded golf teacher in Chicago and Los Angeles. She practiced long and hard for a couple of years and began entering a few tournaments.

Born in Port Arthur, Texas, in 1911, the daughter of Norwegian immigrants, she was Babe Zaharias for most of her competitive golf career, which began in earnest during the World War II years (1942-45). Declared a professional (for her baseball and basketball earnings) after winning the Women's Texas Invitational in 1935, her amateur status was reinstated in 1943, at her request.

In 1945, she won her third Western Open. In 1946 and '47, she won 14 amateur tournaments in a row, including the '46 U.S. Women's Amateur and the '47 British Women's Amateur. She was the first American ever to take the latter, and afterwards she again became a professional, this time for good.

In the late 1940s, Zaharias, Patty Berg, and Betty Hicks re-formed the Women's Pro­fessional Golf Association into the Ladies PGA, and they began developing its tour. Zaharias was a major attraction by virtue of her excellent golf, but also as an outgoing, irrepressible personality. Her show-business instincts and actual background were never far from the surface. From 1948-55, Zaharias won 31 professional tournaments, including three U.S. Women's Opens.

Zaharias's professional golf career was actually rather short -- only nine years -- because her fabled physical capacities began to deteriorate. In 1952, she had surgery for a strangulated hernia. Then, in April 1953, she was operated on for cancer. Her doctor said she would never play championship golf again. But, of course, he underestimated the Babe.

Three months later she was back on Tour, and the following year she won five times, including her third U.S. Open, which she won by an astonishing 12 strokes over Hicks. In '54, she won the Vare Trophy for low scoring average, was second on the money list, and was voted the Associated Press Woman Athlete of the Year for the sixth time. Indeed, she was named the A.P. Woman Athlete of the First Half of the 20th Century, and she was probably the best woman athlete of all time.

The only thing Zaharias couldn't beat was cancer. After the first surgery for the malady, she played winning golf into 1955, when she won twice on the Tour. But in June of that year, she was again operated on, and this time she was unable to come back. She died in September 1956 at the age of 42.