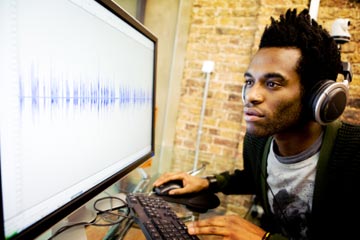 With Auto-Tune, a sound engineer can look at a singer's vocal take and tweak notes that are slightly off key.
©iStockphoto.com/track5

It's rare that a performer can sing flawless vocals in one take. For proof, try listening to a live recording of your favorite band. Most likely, some of the vocals will all be a bit off -- maybe not by much, but just enough that they sound rough when compared to the studio version. Traditionally, studio engineers obtained clean, polished vocals on a song by making the artist record the vocals dozens of times -- then, they edited the best parts together. From Frank Sinatra to Tammi Wynette, laying down multiple vocal tracks in the studio was par for the course.

With Auto-Tune, engineers suddenly didn't need to rely on endless re-recordings to obtain perfect vocals. The singer's last note was a little flat? The engineer simply calls up the full performance on a computer screen and, using a mouse, digitally "nudges" wrong notes into the right key.

The new program saved time and money, and, according to Hildebrand, it made for better music. Here's what Hildebrand told the Seattle Times in 2009:

"Before Auto-Tune, sound studios would spend a lot of time with singers, getting them on pitch and getting a good emotional performance. Now they just do the emotional performance, they don't worry about the pitch, the singer goes home, and they fix it in the mix" [source: Matson].

Within years, 95 percent of all Top 40 songs counted traces Auto-Tune in their production [source: Freeman]. Still, purists derided the software as "cheating"; artists just weren't taking the time to record quality vocal tracks anymore. American singer-songwriter Neko Case summed it up in a 2006 interview: "When I hear Auto-Tune on somebody's voice, I don't take them seriously" [source: Dombal].

Worse, Auto-Tune was also accused of filling pop music with attractive yet untalented singers. Only a few years before Cher's "Believe," the pop duo Milli-Vanilli had been charged with fraud after audiences discovered that the band's two members had actually been lip-syncing vocals performed by different musicians. Fearing a similar scandal, engineers took pains to disguise their vocal-correction footprints as much as possible.

Meanwhile, buried deep in the software was a setting known as the "zero function." One of the ways Auto-Tune makes its pitch-corrections sound natural is by putting small spaces of time in between notes. Just like a real human voice, the software will take a few milliseconds to gently ease from one note to the next. But Auto-Tune came with the option to reducing the space between notes to zero, thereby forcing the notes to change instantaneously from one to the other, giving the vocal track an eerie, computerized timbre.

It was like using Photoshop to dial up a picture to 100 percent brightness. Sure, you could do it, but it would turn your image into a washed-out mess. Similarly, engaging the zero function would transform your vocal track into a clutter of warbly, sci-fi sounds. Surely, the engineers thought at Antares, nobody would ever need to use the zero function. Right?