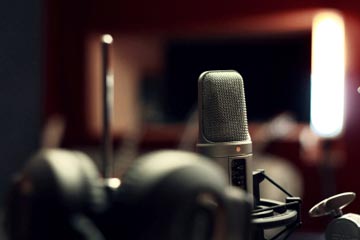 Auto-Tune apparently exists because of a challenge.
©iStockphoto.com/liaminou

Long before he was helping singers find the right note, Harold Hildebrand spent 17 years looking for oil. It was a strange career path for a man whose first love was music. Hildebrand had been playing the flute professionally since the age of 13, and he'd attended the University of Illinois on a music scholarship. But rather than looking to make his fortune in the concert hall, Hildebrand completed a degree in electrical engineering and applied for a job with Exxon Mobil.

Soon, the young whiz had developed a way to find oil using sound. Exploration crews would set off underground dynamite charges, and then, using a technique known as autocorrelation, they would measure the pitch of returning sound waves and use the data to pinpoint oil rich areas. Traditionally, oil companies discovered oil at the end of a drill bit. Exploration crews would roam the seafloor and the countryside, repeatedly boring into the ground until they struck something interesting. With Hildebrand's innovation, they could now get a good idea of the subsurface long before breaking ground.

The technique saved Exxon millions of dollars, and they paid Hildebrand handsomely. By age 40, the engineer had earned more than enough cash to retire. Instead, in the early 1990s, he gathered up his petrodollars and founded Antares Audio Technologies, a quirky music software company in the small California town of Scotts Valley. Hildebrand had learned a lot about sound in the world's oil fields, and with Antares, he aimed to channel that knowledge into the music studio. The company's first invention was Infinity, a program that allowed samples of music to be strung together in flawless, repeating loops. Later products included a host of voice-changers and the Microphone Modeller, a program that can mimic the sound of any microphone, be it a vintage vector microphone or a bluesy harmonica microphone.

But the company's most famous creation came about because of a jokey mealtime quip. While Hildebrand was having lunch with a sales rep, the man's wife said something along the lines of, "Hey Andy, how about inventing something that could make me sing in tune?" Intrigued, Hildebrand took her up on the challenge. He had used autocorrelation to find crude oil -- who's to say he couldn't use it to nudge a bad singer into tune?