Browse the article How the Theatre Development Fund Works 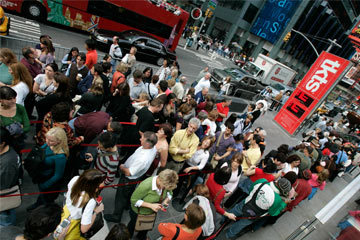 Customers line up at the TKTS booth to buy discounted theater tickets in New York. Hundreds of tourists and New Yorkers line up at the booth daily to buy same-day tickets to Broadway and off-Broadway shows.
AP Photo/Frank Franklin II

This hasn't exactly changed. New York theater is still exciting and glamorous, and if you find yourself in New York City, one of the most thrilling things you can do is go to a Broadway show. But after the first half of the 20th century, the art of live theater began moving to the margins of the entertainment industry. When people wanted to be entertained, they went to a movie or watched television instead. An evening in the theater became an occasional indulgence and the number of plays and musicals in New York shrunk from hundreds to just a few dozen big Broadway shows, plus several dozen more off-Broadway shows.

The Theatre Development Fund (TDF) was created in 1968 to help bolster the sagging fortunes of live theater in New York. The most visible part of the TDF's mission is the TKTS booths, where both New Yorkers and visitors can buy discounted tickets to Broadway shows. But the TDF also provides support for the theater industry by buying large blocks of tickets as well as sponsoring educational programs to help students become more aware of the theater as a form of entertainment -- assuring that live theater will always have an audience. They also offer a variety of services for handicapped theatergoers. TDF members get discounted tickets for a large number of New York shows, both on and off-Broadway.

Thanks in part to the Theatre Development Fund, the New York theater industry is still alive and well and offering entertainment to new generations of theatergoers. And while Broadway theaters may never return to the glory days of the early 20th century, the shows are still there and you can take advantage of the opportunity to see them if you're ever in New York. In the rest of this article, you'll see how the TDF supports the theater and how you might be able to become a member. 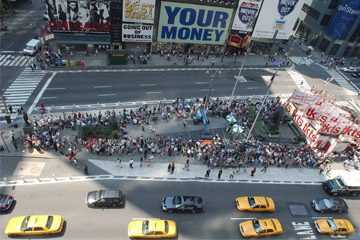 If you've been to see a Broadway show anytime during the last four decades, there's a good chance you bought a discounted ticket at the TKTS booth in the Father Duffy Square portion of New York's Times Square. Or maybe you got it at the TKTS booth in Brooklyn or the one at South Street Seaport in Lower Manhattan. Whichever booth you bought it at, there's a good chance you paid half price for your evening at the theater. If so, you can thank the Theatre Development Fund (TDF) for your discounted ticket. The TKTS booth in Times Square opened in 1973, five years after the TDF's founding in 1968.

The TKTS booths are just one way that the TDF accomplishes its twin missions. Those missions are to provide support for performing arts in New York and to encourage audiences to attend live shows. The TDF has several programs that help accomplish these goals. They include:

Take a look at the Theatre Development Fund's Web site to learn more ways in which they support Broadway and off-Broadway theater. In the meantime, you may be interested in becoming a TDF member. On the next page we'll talk about how you can do that. 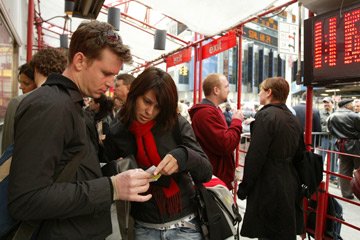 Mario Voegeli and Angela Harp of Zurich, Switzerland, check their tickets to "The Glass Menagerie," after purchasing them at the TKTS booth in Times Square in New York.
AP Photo/Kathy Willens

Not just anybody can become a member of the Theatre Development Fund (TDF). To qualify for membership, you have to be one of the following:

That covers a lot of people, but not everybody. If you don't qualify you can still avail yourself of TKTS discounts or the educational programs that TDF offers, but you won't be able to get the discounted theater tickets that TDF offers only to its members.

If you do qualify, you can apply online at TDF's Membership Application Web site. You'll need to pay an annual fee of $30 and you'll also need to provide proof that you're eligible. For instance, you might be required to send a copy of a membership card from a qualifying group.

Once your membership has been accepted, you'll be eligible for discounts on as many as 200 different Broadway and off-Broadway shows, including dance performances and music concerts. At the time of this writing, shows eligible for discounts include such Broadway perennials as The Fantasticks and Avenue Q, not to mention the American Ballet Theatre, the New York Philharmonic and New York City Ballet. With your membership, tickets for performances will be in the range $20 to $37 a ticket, which can represent up to 70 percent off the normal ticket price, with certain off-Broadway productions available for as little as $9 per ticket.

Whether you're a member or not, the Theatre Development Fund offers services that anybody interested in live theater can take advantage of. Of course, these benefits are only useful if you're in the New York area, but the TDF has a special program for people who live at least 100 miles (161 kilometers) from New York City. It's called a TDF National Membership. You still need to have one of the qualifications listed above, but the price of membership for non-New Yorkers is a much lower: just $12 a year.

For more information about the Theatre Development Fund and other related topics, follow the links on the next page.