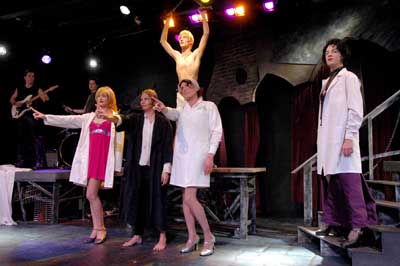 At first glance, science fiction and musical theater seem dissimilar. A sci-fi epic like "Babylon 5," for example, resists comparison to a musical like "Oklahoma!" In space, there is no wind to come sweeping down the plain, and hardly anyone bursts into song.

The two genres have a few things in common, though. Both are elaborate and expensive. While a stage play or sitcom can get by with a few actors and a minimal or recycled set, musicals and sci-fi shows require sets, costumes and make-up that are intricate and unique. They also present something unusual (spontaneous singing, encounters with alien races) as though it were ordinary. Neither tends to inspire ambivalence -- people tend to either love them or hate them.

When the "Lord of the Rings" musical opened in Toronto, the HowStuffWorks staff started thinking about what happens when musicals mesh with science fiction and fantasy. In the process, we came up with a couple of rules for what can make such a project work. In this article, you'll learn what we discovered about real and theoretical sci-fi musicals.

Musicals and science fiction are both a little removed from reality, sometimes to the point of being silly. But rather than trying to shrug off the silliness, the most successful original productions dive right into it.

The most well-known sci-fi musical is Richard O'Brien's "The Rocky Horror Show". In it, ostensibly clean-cut Brad Majors and Janet Weiss wind up stranded at a castle. They initially believe it to be "some kind of hunting lodge for rich weirdos," but it turns out to be the home of transvestite Transylvanian Frank-N-Furter. Hijacks or horrors ensue, depending on your point of view. The resulting musical involves nearly nonstop music, lasers, lots of underwear, the Time Warp and an audio-vibratory-physio-molecular transport device.

The film adaptation "The Rocky Horror Picture Show," in which O'Brien played Riff Raff, has somewhat overshadowed the original stage play, although groups still perform and tour with it. At theatrical showings of the film, which usually play at midnight, fans dress up, shout at the screen and throw things like rice, toast and toilet paper. A cast of actors often acts out the movie in a shadow play in front of the screen.

The runner up for the most famous (or infamous) original sci-fi musical is "Little Shop of Horrors." This musical bends the "original" rule a little, since it's based on a 1960s Roger Corman film. Howard Ashman and Alan Menken, who worked on Disney musicals like "The Little Mermaid" and "Beauty and the Beast," adapted the movie into a musical. The musical was then adapted into another film in 1986.

It doesn't have the midnight showing notoriety of "The Rocky Horror Picture Show," but "Little Shop of Horrors" does have a devoted fan base. The two shows are also on equal footing in terms of absurdity. In the place of a floor show and laser guns, "Little Shop of Horrors" has a trio of do-wop girls and a man-eating plant. And as with "The Rocky Horror Show," theater groups still perform and tour with the show.

These musicals are both wacky. They follow our first rule of sci-fi musicals -- embrace the absurdity. Rather than trying to make an inherently goofy idea seem serious or legitimate, they cross the line into the weird and silly in a way that works.

Musicals based on existing sci-fi works have to do this, too. We'll look at a few in the next section.