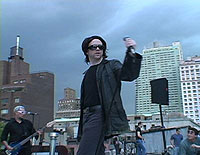 While Improv Everywhere does some pretty crazy stuff, it's really not an "anything goes" situation. There are a few guidelines for missions, including:

That last guideline doesn't always work out. Ghosts of Pasha, for instance, was embarrassed by the "Best Gig Ever" mission when the band found out several days later that the crowd was "faked." The band members felt like they'd been made the butt of a joke (but they soon got over it when they were mentioned in Spin and Rolling Stone and later contacted by an A&R rep from a record label). There was also some embarrassment when Improv Everywhere conducted a "reading with Anton Chekhov" at Barnes & Noble using some old guy with a Russian accent they pulled off the street. Some of the people who'd asked for the Russian playwright's autograph felt pretty stupid when they found out later (presumably from friends or a Google search) that Anton Chekhov died in 1904.

Regardless of whether some people do end up embarrassed by the stunts, most agree that what Improv Everywhere does is good street comedy. In sociology, what the group does is called "norm violation." The missions often represent the ludicrous -- they get people to notice (and often laugh) because they go against everything we've come to expect in the course of daily life. It's funny because the actors behave as if what's happening is completely normal. In San Francisco in the 1960s, comedians Jim Coyle and Mel Sharpe employed a similar technique when they interviewed people on the streets for a radio show, asking questions like, "Are you essentially opposed to taking an animal and trying to evoke music from it?" They acted like the questions they were asking were totally legitimate, and they became pretty famous for it.

Of course, norm violation can occasionally resemble law violation, and Improv Everywhere does occasionally end up dealing with the police. During the "Best Buy" mission, the police showed up at the store managers' request, although the most they could do was advise the managers to ignore the 80 people dressed in blue. Police also broke up Improv Everywhere's "impromptu" U2 concert on Charlie Todd's rooftop in May 2005. In the 2006 "No Pants" mission, one agent was cited by police (Officer Panton, to be specific) for being on the subway in her underwear and "causing public alarm." In a hearing at the New York Transit Adjudication Bureau on April 20, 2006, the cited agent explained that she was in fact wearing "her own underwear plus a pair of 'boy shorts' and boxer shorts." The judge dismissed the citation, stating:

While I find that her "shorts" may indeed have been "short," the allegation that she was wearing "just her underwear" is an overstatement unsupported by the facts and it is unclear (and unlikely) that such an item of clothing by itself would really cause "public alarm" on a New York City subway train.

It's unclear who had to pay that agent's court costs or if there were any. Most costs for missions are covered by Charlie Todd, but the missions usually don't cost much. Improv Everywhere does accept donations via PayPal through its Web site, http://www.improveverywhere.com, in case you'd like to support the madness. Agent Todd would be thrilled to have a bigger budget for his missions, and to that end, he wouldn't turn down a TV deal if it came his way. If you'd like to check out more video footage of the missions, you can watch it on the Web site or wait for the Improv Everywhere DVD to be released, which should be pretty soon (no definite date yet).

For more information on Improv Everywhere and related topics, check out the links below.

Can I Join the Group?

Even if you don't participate in the missions themselves, you can always send in your ideas for a mission for the group to perform. If they like it, they might carry it out (Best Buy and Cell Phone Symphony, for instance, were submitted by e-mail). The group also visits colleges (for a fee) to give seminar-type shows, improv workshops or to put together a mission.