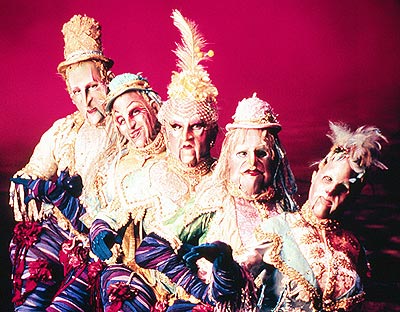 Costuming and makeup design is an important element in all Cirque shows. The costume designer's goal is to design a costume that creates a character and allows the cast member to perform unconstrained, all while blending aesthetic elements and safety concerns.

"The White Angels are the graceful guardians of Alegría. Agile, confident and daring, the angels are the youth of tomorrow. Their bearing is regal, their arms - like wings - are always poised elegantly at their sides. Dressed all in white, with breastplates of woven gold and their noses painted red, the Angels support one another as they take turns tumbling through the air on the Russian Bars.

The nostalgic Old Birds observe the goings on as though they were still young and beautiful and the future was still theirs. They admire their reflections in mirror-less frames but are only empty shells, shadows of their former selves. They are the old aristocracy, still convinced of their power and beauty. But they are twisted, deformed and ugly. They wear fanciful hats and hide behind their flamboyant costumes in rich tones of mauve, green and gold, covered with lace, jewels and embroidery."

Lemieux and the Cirque costume design team spun a little Cirque magic to create simple white lace costumes for the Angels and garish, flamboyant costumes and masks for the Old Birds. Since the White Angels act takes place on the Russian bars, safety and range of motion were major considerations in the design of their light but solid costumes. Using a special Cirque-designed tool, the costume designers made the White Angel costumes from a special lace incorporating fishing line. The modified lace is strong enough to support 1,000 pounds of pressure.

The strong man outfit in Alegria is also highly innovative. It incorporates unobtrusive support mechanisms that allow the performer to safely lift the heavy weights required for the act. The costumes for Alegria's storytellers, the White and Black Singers, are dresses outfitted with hoops and a steel blade typically used for unblocking toilets.