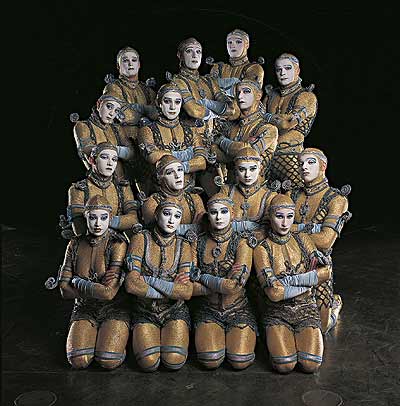 The first thing the team determines is the show's theme. The theme is a delicate balance, because it must tie the acts together without adding up to a narrative. The Cirque team avoids straight narrative in order to allow room for the audience to interpret the show any way they want.

Alegria's central themes are power and contrast. According to Pierre Parisien, artistic director for Alegria and a Cirque veteran, the creative team was inspired by a tragic event that occurred in London: "At the beginning of the '90s… two children killed another child. They were young, they were like 10 or 11 years old and they killed… just for the sake of it. That major incident had an effect on our set designer who brought this story up at the conceptual meeting. And everybody started to talk about it and that is where the idea about doing a story about power emerged."

Each Cirque show's theme is tied closely to the show's soundtrack. In the next section, we'll examine this part of the creative process.

HowStuffWorks would like to thank Cirque du Soleil's Artistic Director Pierre Parisien and Public Relations Director Renee-Claude Menard for their help with this article.