by Linda C. Brinson
Prev NEXT
3 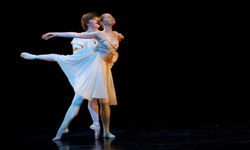 Pas (pah) literally means "step." In ballet, it can mean a simple step or a more complex movement that involves some sort of action. A pas de bourrée (pah duh boo-RAY), for example, may be done in various ways, but usually involves three steps, with the first two in demi-pointe position. A pas de chat is named for its similarity to a cat's leap. A pas de valse is a gracefully swaying waltz step. A pas de marché is a dignified march step that you can expect to see when the ballerina and the premier danseur (leading male dancer) take a walk together.

In ballet, the term can also refer to a dance. You can tell the number of people involved in a certain dance by its name. A pas seul is a solo. A pas de deux is a duet. A pas de trois is a dance for three and so on.