by Linda C. Brinson
Prev NEXT
7 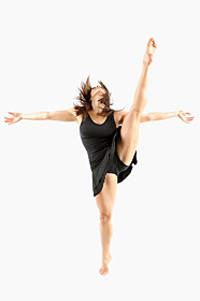 Battement (bat-MAHN) is a widely used term for a variety of beating movements done with the leg either extended or bent. Battement is such a common term in ballet that it's often omitted because it's understood. A battement frappé (struck beat, in full), the exercise that forms the basis of the jeté, for example, may be called simply frappé [source: Dancehelp.com].

There are two main types of battements: