Did Shakespeare use real witches' curses in 'Macbeth'? 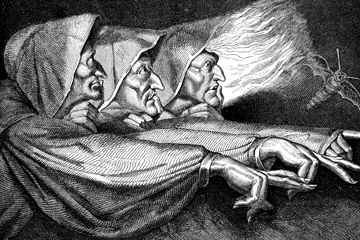 All plays are going to encounter some misfortune, but do productions of "Macbeth" encounter more than their fair share, thanks to those pesky witches and their curses?
ilbusca/Getty Images

In the play, Macbeth returns from the battlefield to encounter three witches who make a trio of prophecies. Many playgoers and performers believe the incantations in "Macbeth" were genuine curses taken from an actual coven. How else is it possible to explain the injuries, accidents and illnesses that have befallen so many of the people who have become involved with its productions?

During the first performance of "Macbeth" in the early 1600s, the actor portraying Lady Macbeth fell ill and died onstage, forcing Shakespeare to take over the role. In later performances, theatergoers became so caught up in the action, they sometimes formed an angry mob and tried to exact justice on Lady Macbeth. In 1849, for example, more than 30 people died when rioting occurred partway through the play.

Legendary actors like Laurence Olivier and Charlton Heston experienced close calls during performances of "Macbeth." Olivier, who played Macbeth in 1937, was nearly crushed to death by a stage light. Heston, who took the role in 1953, was severely burned on his lower extremities after his tights were somehow doused with kerosene [source: Macgowan].

The eddy of misfortune swirling around "Macbeth" seems to mimic the tragedies taking place on stage. Macbeth's wife, in an effort to speed his rise to the throne, encourages him to murder the reigning king. When Macbeth does, he enters into a state of paranoia. He murders his best friend, whose children are prophesied to take the throne in the future, as well an entire family he sees as competition. In the end, Lady Macbeth dies of guilt and Macbeth is killed, too.

Meanwhile, audiences have been left to wonder whether the witches after whom the "Macbeth" roles were patterned stole into the theater, watched that first dress rehearsal and left a curse that has endured for centuries. Perhaps they didn't appreciate their spells being put on display for public consumption. Or maybe they weren't fans of the theater. Whatever the reason, legend has it they banded together and cursed the play's future productions.

There are other, more plausible, explanations, though. For starters, most of the play is performed in dimly lit, foggy conditions that have probably led to the many onstage accidents that have plagued productions. Then there are the fight scenes: "Macbeth" has more skirmishes than most plays, which increases the odds that something will go wrong. Condense all this strife into The Bard's shortest tragedy, and it's no wonder people have been hurt.

The truth is, all live productions flirt with mishaps both large and small. Costumes malfunction, actors get sick, crew members become injured. When multiplied by the thousands of times "Macbeth" has been performed throughout the last four centuries, these problems are bound to add up -- and perpetuate the belief that the play is cursed.