by Ed Grabianowski
Prev NEXT
20 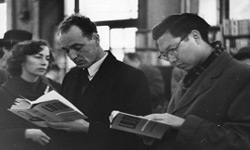 A group of London bookstore customers eagerly read "Lolita" as they wait to check out.
Keystone/Getty Images

This controversial novel by Vladimir Nabokov was first published in 1955. It has often been banned due to the nature of its subject matter – it concerns a man, Humbert Humbert, who develops a sexual relationship with his 12-year-old stepdaughter. Despite its lurid premise, the novel does have its champions: Time named it one of the 100 best novels ever published since the magazine's 1923 debut [source: Grossman].