by the Editors of Publications International, Ltd. & Denise Harrison
Prev NEXT
17 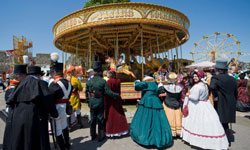 Polly Toodle is a kind and jolly character whom Dickens refers to as "plump rosy-cheeked wholesome apple-faced young woman." Toodle is hired as a wet nurse by Mr. Dombey to take care of his two children after his wife dies giving birth to their youngest, a boy named Paul. Mr. Dombey is delighted to have a son; Paul will be heir to his father's business, Dombey and Son, a trading company. Toodle takes care of Paul and his sister, Florence, according to Mr. Dombey's rules, but after she takes the children to her home in the poor section of London, a clear violation of Mr. Dombey's set of restrictions, she's fired.