by the Editors of Publications International, Ltd. & Denise Harrison
Prev NEXT
19 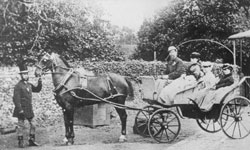 Author Charles Dickens (1812-1870) pictured with his wife, Catherine Dickens (1815-1879), and two of their daughters, seated in a horsedrawn carriage, circa 1850.
Kean Collection/Getty Images

Sloppy, or Mr. Sloppy, is one of Dickens's many orphan characters. Sloppy and other children are taken in by Betty Higden, for whom Sloppy does chores, such as helping her watch the other children and reading to her from the newspaper. While thought to have a learning disability, his reading so delights Hidgen that she exclaims, "You mightn't think it, but Sloppy is a beautiful reader of a newspaper. He do the Police in different voices."

When Sloppy is given the opportunity to be adopted by a family named Boffin, he refuses out of loyalty to Hidgen. Hidgen is so devoted to Sloppy's future that she actually runs away so that Sloppy will have no choice but to join the Boffins. Sloppy winds up returning the favor to the Boffins by foiling the plot of a man who was trying to blackmail the family. In fact, he ends up depositing the evildoer into a trash bin. Sloppy eventually becomes a carpenter and falls in love with a disabled young lady who makes doll clothes.