by the Editors of Publications International, Ltd. & Denise Harrison
Prev NEXT
7 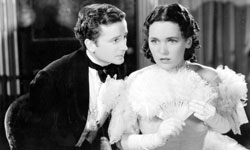 Actors Frank Lawton and Maureen O'Sullivan play the young hero and his childlike wife, Dora, in a scene from the 1935 film "David Copperfield," directed by George Cukor for MGM.
Hulton Archive/Getty Images

Uriah Heep could earn a spot in any top 10 list of the vilest of characters. He's the conniving law clerk to Mr. Wickfield, who develops a drinking problem after the tragedy of his wife's death. Heep, who professes that he's "umble" and meek, covertly encourages Wickfield's drinking while manipulating Wickfield's financial affairs, forging documents and stealing money. Heep eventually manipulates his way into becoming the controlling partner of the business, and he also has his eye on Wickfield's daughter, Agnes, to marry.

Heep is eventually exposed and goes to prison, where he continues to play his meek and "umble" act to his benefit.