by Ed Grabianowski
Prev NEXT
9 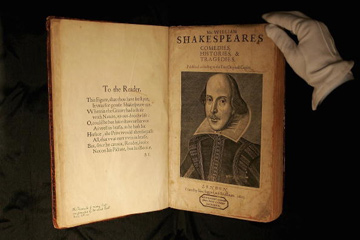 No author has exerted more influence on Western literature than William Shakespeare. His works have been performed and read around the world and continue to be revered almost 400 years after his death in 1616. The First Folio is a remarkable book because it is the first authoritative collection of Shakespeare's plays ever published.

The works were compiled by Shakespeare's friends and business partners, John Heminge and Henry Condell, who helped run his theater company. For this reason, they had access to early drafts, notes and stage directions, as well as direct knowledge of the author's work [source: British Library]. For historians and fans of the Bard's plays, the First Folio is the best representation of Shakespeare's writing, unadulterated by editors or modern translations.

An estimated 750 copies of the Folio were printed in 1622 and 1623. It contains 36 plays -- which includes almost every play Shakespeare is thought to have written. Many of the plays were published for the first time in the Folio, which is superior to earlier quartos, or abridged reproductions of single plays. However, the First Folio isn't perfect itself: Some plays have lines altered or deleted to fit the book, and each copy has a variety of typographical errors.

Today, many theater companies prefer to use the First Folio versions instead of modern editions, and reprints of the First Folio make these easy to access. You can even find digital versions of it for free. However, the rarity of original editions combined with Shakespeare's reputation make this one of the most valuable rare books in the world. In 2006, a copy was auctioned by Sotheby's for 2.8 million British pounds (roughly $4.2 million) [source: BBC].