Infinity Earths and Beyond 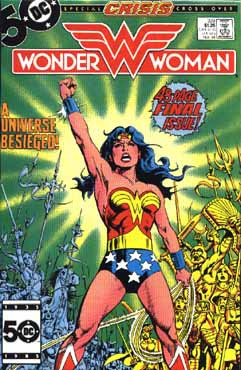 Through the 70s and early 80s Wonder Woman comics fell victim to the same problems that affected the other DC comic lines. There were a growing number of "parallel universes" that had been formed to smooth over continuity errors like conflicting histories and false origin stories. Any time a writer wanted to change a character's past or ignore part of their story line, he or she would just do so and then explain that the next ten issues took place on "Earth-3" instead of regular Earth. The roots of this practice can be seen in the earlier "Impossible Tales" where Wonder Tot, Wonder Woman and Wonder Girl all existed in the same story.

It was a handy device until all of the plot lines and character histories were so fragmented and confused that nobody could keep track of the truth anymore. DC eventually realized this and created the "Crisis on Infinite Earths" series where they killed off all of the old parallel worlds (and characters) leaving but one, and rewrote a canonical version of each character's history that could not be changed. As part of this house-cleaning, Wonder Woman was killed off to be brought back in a new series.

Like the other DC Characters, Wonder Woman's history was rewritten after The Crisis. Writer George Perez created the new series with an emphasis on Greek mythology and the conflicts between the gods. New Wonder Woman came to man's world speaking only Ancient Greek with no knowledge of the current civilization. Though she was physically similar, the new Etta Candy was no longer a sorority girl; in the post-Crisis world she was now a military officer. Steve Trevor was a fair bit older than he was in the old stories. As a result, his love interest was now Etta instead of Wonder Woman.

Here's the origin of the current DC Comics version of Wonder Woman, from their site. They've taken the general outline of the original William Marston story and made it into something a little different:

She is the reincarnated spirit of a human child who died in her mother's womb almost 30,000 years ago, brought to life by several Greek goddesses to combat the schemes of Ares, God of War ... These Greek goddesses, as well as Hermes the messenger god, funneled the spirit into a clay sculpture crafted by Hippolyta, bringing it to life. Given special powers by each of these Olympians, Diana secretly entered a tournament designed to find the worthiest Amazon, who would go forth and confront the War God's evil. She won and, as Themyscira's champion, defeated Ares before he could bring about a nuclear holocaust.

In the WW comics during the seventies, Wonder Woman learned that she could fly, or more precisely, glide on air currents.