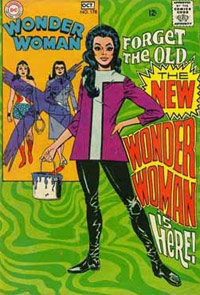 Throughout the 1960s, the popularity of super hero-type comic books across the board was ebbing. DC decided to revamp the Wonder Woman line and capitalize on the burgeoning secret agent fad characterized by British television shows like The Avengers and The Prisoner. Wonder Woman was given a drastic makeover.

Here's how we get there: The other Amazons are headed to a parallel dimension to get their mojo (ok, their powers) back. Rather than leave "man's world," Wonder Woman elects to stay without her powers, and becomes the proprietor of a hip clothing boutique. Her formerly patriotic and super-heroic tiara and red, white and blue getup is replaced with the coolest jump suits and miniskirts the 1960s had to offer. She's schooled in the martial arts by a mysterious Asian chap named I Ching, and her missions are stealthy and political. Steve Trevor is killed off for the first time in this period. It's a very different Wonder Woman.

This version only lasted a few years. One of the events that eventually pulled Wonder Woman back to something closer to her roots was feminist Gloria Steinem's groundbreaking essay on the subject in the first issue of Ms. Magazine. But 60s mod Wonder Woman had a lasting influence on future comics and television adaptations.