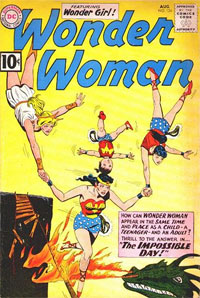 William Marston passed away in 1947. He left behind a contract that gave DC Comics the right to exclusively publish Wonder Woman comics as long as they continued to keep the title going. If they ever stopped publishing it, the ownership would permanently revert to Marston's estate. This has made Wonder Woman one of the longest-running super hero comics in history.

A series of writers including Robert Kanigher and Denny O'Neil took over the writing responsibilities after Marston's death. With the new writers in the late 40s and 50s, Wonder Woman went through many changes. Her feminism was toned down, her origin stories were revisited and deepened, and she was given some new toys to play with. Here are some of the highlights: