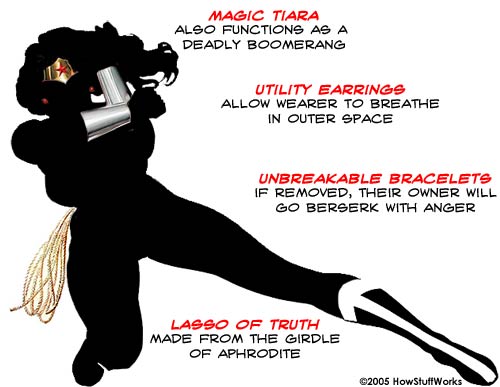 Marston's Wonder Woman is an Amazon princess who grew up on an island called Paradise Island, or Themyscira. She gained the title of Wonder Woman when she won a ceremonial contest and was declared the most skilled and intelligent member of her tribe. When an Air Force pilot named Steve Trevor crash-lands on Themyscira, the tribe sends their Wonder Woman to heal his wounds and accompany him back to "man's world" (the area outside of the island) as an ambassador. Back in man's world she takes on the identity of Diana Prince to hide her true nature.

Wonder Woman embodied Marston's vision of woman as intelligent, honest and kind. She had great powers of persuasion. As an Amazon, she was skilled in hand-to-hand combat. Unlike other super heroes, her mission wasn't just to stop crime, but to reform the criminals into upright citizens as well.

Here's a breakdown of her special powers and weapons:

The two other characters to last through all of the Wonder Woman comic series' from 1941 to today were Steve Trevor and Etta Candy, Wonder Woman's sorority girlfriend. Etta had a propensity to overuse her "Woo woo!" catch phrase. She was an all-purpose hero's best friend, inadvertently luring the hero into trouble one week, and giving her a hand with a difficult mission the next.

Wonder Woman was the first female member of the prestigious Justice Society of America. But as the first female member, she was immediately given the un-prestigious title of secretary. Who knew that the justice society even had a secretary? To add insult to injury, when she leaves the group for an extended period of time, the other members force her to undergo more than a year of trials before she's allowed back in.