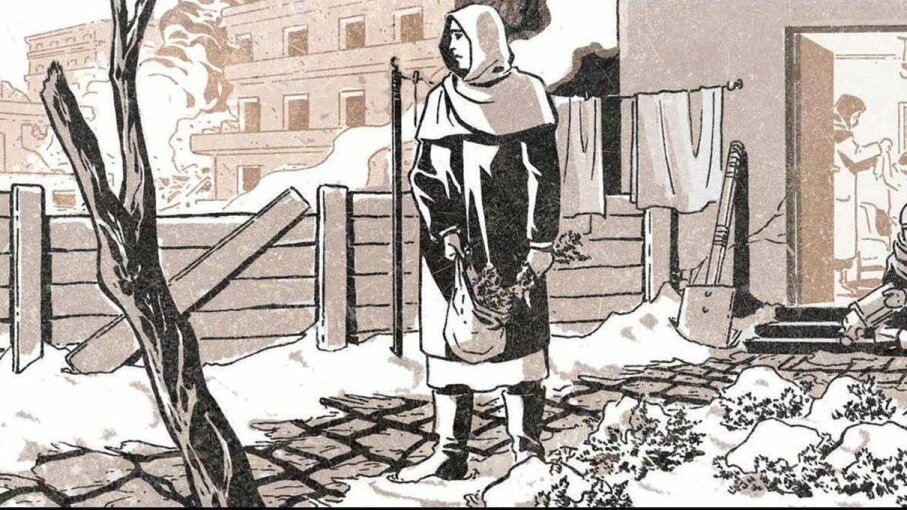 A drawing from "Madaya Mom," a new comic that depicts life in the besieged Syrian town of Madaya. The comic is based on the perspective of an actual mother of five children from Madaya who shared her experiences of living in the war-torn region with AB... ABC News/Marvel

Madaya is a small Syrian resort town, nestled in the mountains just 25 miles (40 kilometers) from Damascus. Since October 2015, the once-popular vacation spot and its 40,000 residents have been under siege and blockaded, leading many to starve to death.

Brice de le Vingne, the director of operations for Doctors Without Borders, said in a January 2016 report, "The medics we support report injuries and death by bullet and landmine wounds from people that tried to leave Madaya."

As Doctors Without Borders was releasing its report, ABC News was starting to think about profiling a family trapped in the city. The news team eventually started communicating with a mother they called Madaya Mom via text and phone conversations, covering the family's descent into despair, from destroying their furniture for firewood to boiling leaves for food. The mother of five children sent missives to ABC about the family's situation during the continuing siege of Syrian President Bashar al-Assad's forces.

Fast-forward nine months to the beginning of October, and ABC and Marvel Comics announced a new project, taking this mother's own words and representing them in the medium of digital comics. The collaboration added imagery to the words of her struggles to keep her family from starving to death under the heel of al-Assad.

"Madaya Mom's words were incredibly powerful, and descriptive, that we all wanted to find a way to visualize them," Dan Silver, the executive producer at ABC News Digital, told us by email.

The "Madaya Mom" comic uses the actual mother's own words that she sent to ABC News.
ABC News/Marvel

Since ABC's reporters were turned away from Madaya and unable to get footage inside the town, Silver thought about different ways to tell Madaya Mom's story visually and without compromising her identity. In his previous position at ESPN films, Silver had worked with Marvel, and he thought comics might be the perfect solution.

"I reached out to them simply to see if there was an up-and-coming talent they could point me towards to discuss this idea, and after laying it out to them, they just blatantly said, 'Oh, we'll do that for you.' And that was it; the collaboration kicked off."

Reporters Xana O'Neill and Rym Momtaz had collected the words, but Marvel would provide the pictures. And so artist Dalibor Talajić was brought into the fold, a natural choice as he had firsthand experience with living in a war zone. Talajić had grown up in the former Yugoslavia during its own conflict. He was able to bring a raw realism to the comic that suits its nature as a real-life report.

This isn't the first time that comics have ventured into war reporting. Joe Sacco, for example, is a very influential cartoonist who helped legitimize cartooning as war reportage with his books "Palestine," "Footnotes in Gaza" and "Safe Area Gorazde."

"Madaya Mom," an almost exclusively digital comic, is available to read now at ABC's website. Marvel and ABC did print limited copies that were given away at New York Comic Con.

The comic has been praised for its accuracy by the most important audience: "Madaya Mom herself was surprised by how close the comic comes to her actual life. And in so many ways, that's all we can ask for. Being true to the one person that started this all, Madaya Mom," Silver said.

WHAT'S HAPPENING TODAY?
On Oct. 8, 2016, one year into the blockade of Madaya, the U.N. Security Council held a vote on a resolution to try to cease the conflict in Aleppo, Syria, and offer a truce that would allow humanitarian aid throughout the country. The resolution was vetoed by Russia. Russia proposed a resolution, too, which was also shot down.