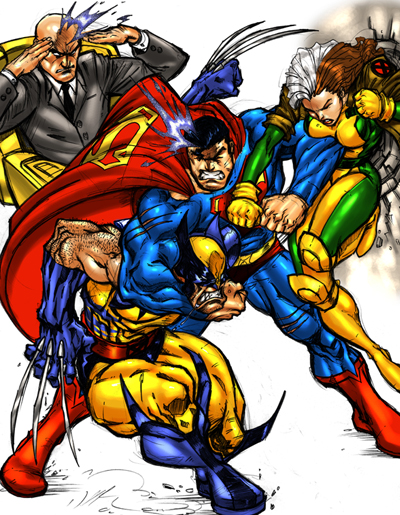 Could one of the X-Men take Superman single-handedly, or would it take the whole team?
Image © HowStuffWorks/ Superman © DC Comics X-Men © 2006 Marvel Characters, Inc.

The most logical people to pit against Superman are other superheroes. Even though they can't all beat Superman, many can at least hold him off for a while. Most of the superheroes we'd like to see go head-to-head against him are from Marvel Comics rather than D.C. Comics. The barrier between those worlds would have to fall for a while to let these brawls take place.

Some of the X-Men might be able to take on Superman without a lot of help. A fight between Wolverine and Superman, for example, would be like an unstoppable force meeting an immovable object. Superman is stronger and faster, but Wolverine has his adamantium skeleton and claws. Ultimately, the outcome depends on how strong and sharp adamantium really is and whether it can stand up to Superman's strength and heat vision. Wolverine's healing factor might give him a slight edge, but not if Superman hurls him into the sun. The outcome of their fight would depend on luck, chance and cunning.

While Wolverine might hold his own while fighting Superman physically, Professor X and Jean Grey -- even pre-Phoenix Jean Grey -- are ideally suited to fighting him telepathically. Both are powerful psychics, and Superman has no defense against psychic attacks. Either character could defeat him by entering and destroying his mind, especially if they caught Superman by surprise.

Another good opponent from the X-Men is Rogue, whose mutant abilities allow her to absorb ordinary people's strength and memories as well as mutants' superpowers. With a little luck, Rogue could touch Superman and absorb his powers. If she held on long enough, she could kill him, but it's unlikely that Superman would allow her to do so.

However, the power Rogue absorbs may be the ability to gain strength from the Earth's yellow sun rather than the physical manifestations of that strength. If that's the case, she would lose the ability she absorbed long before becoming strong enough to fight Superman. In addition, Superman is much faster than Rogue is, so she'd need perfect timing or the assistance of other X-Men to distract him while she made her move.

With members like Rogue, Professor X and Wolverine, it seems obvious that a team of X-Men could overpower Superman with ease. However, his speed, hearing and physical invulnerability could make the battle difficult -- the mission would require extensive planning and careful execution.

Another Marvel character who might be a worthy foe for Superman is Galactus, also known as the Devourer of Worlds. Superman can reverse the spinning of the Earth to reverse time, but Galactus consumes entire planets. He's is an immense being who can wield the Power Cosmic, a force so powerful that Galactus has to wear special armor to contain it. On a purely physical level, he's bigger, heavier, stronger and more powerful than Superman. Beyond that, he's the Third Force of the Universe and keeps the balance between Eternity and Death. Fighting Galactus would be much like fighting a god.

However, if Superman is invulnerable to the Power Cosmic, it wouldn't matter how big or strong Galactus is. Superman would be able to outmaneuver him, and eventually Galactus's power would wane as he became hungry for another world to devour.

We could talk at length about whether Batman could defeat Superman. But lots of people have done so already, including Frank Miller in "Batman: The Dark Knight Returns." A movie called "Superman vs. Batman" was even in the works as recently as 2002. It all comes down to the creative use of kryptonite, combining it with Batman's cunning and technical savvy.

If Chuck Norris can turn up the sun when he gets cold, he can turn it down when he fights Superman.

Superman is big and strong, but Kaiser Soze is wily. Could he con the Man of Steel into doing something deadly? Maybe. But in spite of his skill at disguising his identity, Kaiser Soze certainly couldn't convince anyone that he's really Superman.