Superman vs. the Death Star 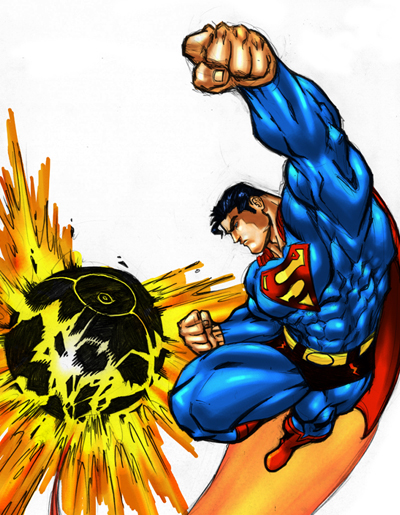 Superman has x-ray and heat vision, freezing breath and an impenetrable field that surrounds his body and his clothing. He can move at tremendous speeds, and he can fly. The Death Star has 10,000 turbolaser batteries, 2,500 laser cannons, 2,500 ion cannons and 768 tractor beam projectors. It also has a Superlaser, which focuses the energy from the station's hypermatter reactor into a beam capable of destroying planets.

When fighting Superman, the Death Star's Superlaser might be a liability instead of an asset. The reactor's power output is comparable to that of a small star. Depending on how similar this energy is to that of a yellow sun, the laser might actually make Superman stronger. But even without a power boost from the Superlaser, Superman would still be invulnerable to the Death Star's other weaponry. Even if the Death Star managed to trap Superman in its tractor beams, it might not be able to penetrate his skin with its weapons.

In addition, Superman wouldn't need to find a two-meter-wide thermal exhaust port in order to destroy the Death Star. His strength and dexterity would allow him to punch his way through the hull to access to the space station's reactor. He could then use his heat vision to start a chain-reaction and fly out again to escape from the resulting explosion.

To defend itself against Superman, the Death Star could leave the vicinity of any yellow sun and stay so far away that Superman couldn't reach it before losing his powers. But this might only delay the inevitable -- Superman's body has stored so much energy from the Earth's sun that his batteries may never run out. Then, the Empire could retrofit its weaponry to use kryptonite ordnance. Otherwise, the Death Star would fall quickly.

We'll look at what would happen if Superman fought superheroes from a galaxy closer to home in the next section.