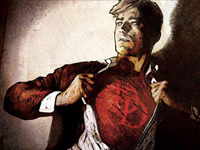 Chances of being exposed in the near future: Inevitable. A tabloid once exposed Matt as Daredevil which led to him eventually faking his own death. Recently, the villain Silke revealed that Matt Murdock is Daredevil in order to cut a deal with the FBI. While the government military organization known as S.H.I.E.L.D. is attempting to keep this information secret, a desperate agent sells out Daredevil to the Daily Bugle Newspaper. In response to a front page outing, Matt Murdock held a press conference stating that he is not Daredevil and continues to deny that he is the man without fear. With the list of high caliber villains that know DD's identity and the number of times he's been publicly unmasked, it's going to take a deal with the devil to keep the law offices of Murdock and Nelson open much longer.

Know another character who is privy to the identity of one of our five spotlighted heroes? Drop us a line and prove your mastery of the comic medium: crimson bullet at stuffo dot com.