The Bat's Out of the Bag 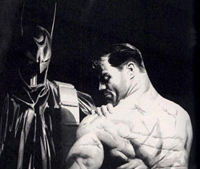 Is that a target on my back?
Photo courtesy DC Comics

Chances of being exposed in the near future: Highly likely. The villain Bane showed just how dangerous letting the secret slip can be when he ransacked stately Wayne Manor and broke Bruce's spine. With such a large rogue's gallery of villains aware of his public persona, the threat of retaliation towards those close to Bruce Wayne is ever present. Plus, the large group of civilians who know Batman's identity make easy prey to those determined to learn who is underneath the mask and pointy ears. Even worse -- it is hinted at, though not confirmed, that Batman's greatest foe, the Joker, is aware of his civilian identity (but is probably too psychotic to care). Better beef up Wayne Manor security and add another padlock to the Batcave door.