Dangling by a Thread 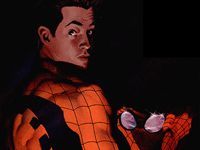 Chances of being exposed in the near future: Even. With many of his knowledgeable enemies either comatose (Mendel Stromm, Stunner), amnesic (Doc Ock, Venom), inactive (Puma), or too powerful to care (Nightmare, Mephisto, Thanos), one would think Spider-Man is sitting pretty -- right? Wrong. The only thing keeping Spidey's deadliest foe, the Green Goblin, from exposing his secret ID is the Goblin's insanity coupled with his twisted sense of honor and respect. On numerous occasions, Norman Osborne has thrown monkey wrench after monkey wrench into Parker's personal life, including purchasing the newspaper where he works, orchestrating a plot to make him believe that he is a clone, kidnapping his newborn child, and even replacing his Aunt May with a genetically altered actress. After his public identity was revealed and he was sent to prison, exposing everyone's favorite wall crawler to be Peter Parker might be Norman Osborn's last act of vengeance.