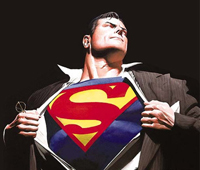 Clark should probably ditch the "IM SUP-R-MAN" vanity plate just to be on the safe side.
Photo courtesy DC Comics

Chances of being Exposed in the near future: Not likely. While most of those aware of his public persona are fellow heroes, the few villains privy to this knowledge are either currently out of commission (Dominus and the Cyborg are trapped in the phantom zone, Brainiac is stuck at the beginning of time) or could care less (Bizarro and Mxyzptlk only care for the challenge of battling Superman). Though it wouldn't hurt to be a little more hesitant to let his pals in on the secret, Supes should be ducking into phone booths for a long time.