The Fast And The Curious 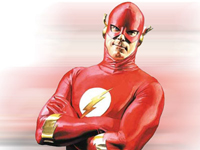 Allies aware of true identity: Linda Park (Wife), The Justice League of America (Each current member of the JLA revealed their identities to each other. This includes Aquaman, Batman, Green Lantern, Martian Manhunter, Plastic Man, Superman and Wonder Woman.)

Enemies aware of true identity: None

Chances of being exposed in the near future: Minimal. The Flash's identity was once public knowledge, but after losing his unborn child to arch-foe, Professor Zoom, Wally West agreed to accept an offer from the supernatural being known as the Spectre to make the entire world forget that he was the Flash. Only those closest to Wally, including his wife and members of the JLA, have eventually remembered his dual identity. With no villains quick enough to decipher the truth, The Flash is in the clear ... for now.