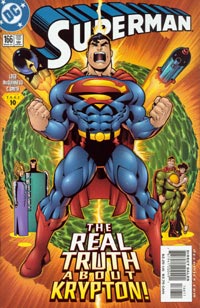 Just before the explosion that destroyed Krypton, Kryptonians Jor-El and Lara outfitted their son Kal-El's birthing matrix for space travel. They sent Kal-El to Earth, where Kansas farmers Martha and Jonathan Kent found and adopted him. The Kents named the baby Clark, and he grew up to be Superman.

As Kal-El's birthing matrix traveled through space, it pulled fragments of the destroyed planet, made radioactive in the explosion, along in its wake. This radioactive debris became known as Green Kryptonite, or simply kryptonite, and it is deadly to super-powered Kryptonians. It does not react with oxygen, so it does not combust when it enters Earth's atmosphere. However, kryptonite is not invulnerable -- you can cut it, chip it, crush it and melt it with acid.

When exposed to Green Kryptonite, super-powered Kryptonians instantly become weak. With prolonged exposure, they die. Green Kryptonite has this effect because the interaction between two substances: its radiation and the Kryptonian's cells.

On Earth, a variety of naturally-occurring and manufactured substances emit radiation. They do this through one of three processes:

Atoms that undergo any of these processes often have lots of extra energy. They emit this energy as gamma rays, which are electromagnetic pulses -- they're made of energy, not matter. Each of these forms of radioactive decay creates ionizing radiation, which can knock electrons off of atoms. X-rays, another form of electromagnetic energy, are also a form of ionizing radiation. Check out How Nuclear Radiation Works for more information.

Relatively speaking, alpha and beta particles cannot penetrate very far into matter. Gamma rays and X-rays, on the other hand, can penetrate matter, including human bodies. Their ability to displace electrons from atoms can cause cells to mutate, sometimes causing cancerous tumors. Fortunately, lead blocks both gamma rays and X-rays. It's able to do so because of its high electron density. The rays are unable to penetrate the dense web of electrons found in a piece of lead.

We'll look at how this radiation causes its deadly effects in the next section.

"Kryptonite" is one of those words that has absorbed a second meaning in common parlance. Some people use it to mean "something I absolutely cannot abide." Ghosts and airplanes are the author's kryptonite, and HowStuffWorks staffers named the following as their kryptonite in response to an informal e-mail poll: