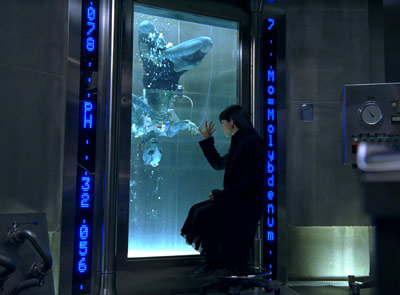 The final step in the adaptation of the comic book was making sure that the world the "Hellboy" characters occupied fit the bill. Stephen Scott was brought in to build that world.

"My art is very graphic, and it would seem that there's a limit to what you can do with it in the real world, but Guillermo perfectly captured the feeling of it. He set certain rules in doing that, assigning certain shapes and colors to the various character and design elements. It's an extremely controlled atmosphere."

Stephen Scott's production design took its cue from Mignola's comic books, but also expanded it by blending it with the Gothic environment of the film's Prague shooting location.

Demon-red Hellboy is a stark contrast to the dark world created for the film.
Photo courtesy HB-042 = Egon Endrenyi © 2004 Revolution Studios Distribution Company, LLC. All Rights Reserved.
"From [the comic] we developed the sets, incorporating images from the book and trying to be true to the comic's color scheme -- black and brown, black and gray with a strong hint of purple and green. That makes the character of [the decidedly red] Hellboy pop out more."

In order to coordinate his efforts with del Toro's vision, Scott came up with a method to ensure that all the films tricky shots would be possible in the sets he planned. Scott made sketches and models of all the sets before building the full-scale sets and outdoor locations to suit the film. He then used a mini camera that was plugged into a TV monitor. This mini walkthrough gave both the Director and the Director of Photography an idea of which shots were possible on any given set.

"A model always tells a lot of stories. It conveys the scale and enables you to see everything in a three-dimensional way."