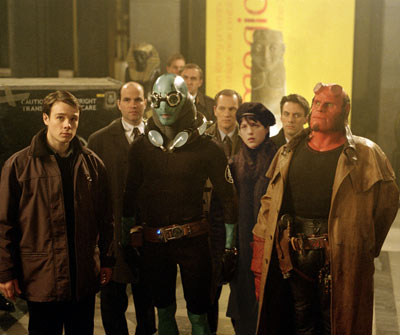 Hellboy is a character-driven comic. The movie has followed suit. Mignola and del Toro chose all the actors for their abilities and physical resemblance to their comic-book counterpart. The result is an ensemble cast that drives this adaptation to the level of impact of its source.

Abe Sapien and Professor Broom
Photo courtesy HB-042 = Egon Endrenyi © 2004 Revolution Studios Distribution Company, LLC. All Rights Reserved.
"John Hurt as Broom looks exactly like the character in the comic book. At times I thought I must have looked at a photo of Hurt when I drew this guy. It was spooky."