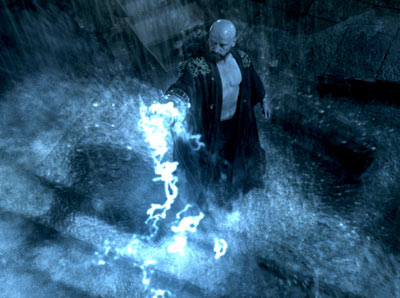 Every super hero has to have a villain to battle. In the film adaptation, Hellboy battles his nemesis, Rasputin. Rasputin is a Russian holy man thought to be dead. An evil sorcerer who has worked for Russian Czars and Hitler himself, Rasputin uses the resources of his employers for his own evil ends.

Rasputin summoned Hellboy to the Earth to destroy it, and disappeared after being defeated by Professor Broom. Many years later, Rasputin has resurfaced to make sure Hellboy fulfills his destiny.

Famous Czechoslovakian actor Karl Roden was cast as the madman Rasputin. Roden worked with del Toro on "Blade II." The director knew that Roden possessed the acting chops to pull off this strange foil.

"Rasputin has been perpetrating evil through the ages. Hellboy is key to his apocalyptic plans. He's the piece of the puzzle Rasputin needs in order to bring Hell to Earth. He really believes there's a cause to be fought, that Earth should be destroyed because of its impurities..."

"He thinks he wants to rescue the world. He may be doing bad things, but from his perspective, he is trying to achieve good."